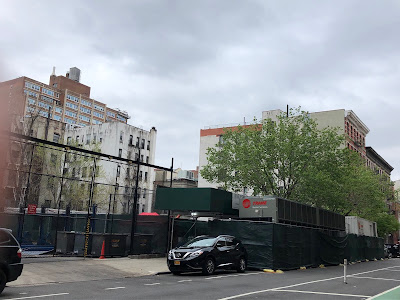 [Where the new 7-floor hospital will rise on 13th Street]

For starters, they have submitted an application to the state Department of Health to close and relocate Mount Sinai Beth Israel from its current location on First Avenue and 16th Street to Second Avenue and 13th Street.

As previously reported in the fall of 2016, the Mount Sinai Health System is in the midst of its years-long project to rebuild Mount Sinai Beth Israel, transitioning to a network of smaller facilities throughout lower Manhattan.

The plans include an expanded facility on 14th Street and Second Avenue, which includes a new 7-story hospital on 13th Street on the lot where a now-demolished 14-floor building that housed training physicians and staff once stood.

Expected to open in 2023, the new hospital will feature all private inpatient beds, cutting edge cardiac and neurologic interventional services, an operative platform, and a state-of-the-art emergency department. It will be integrated with the New York Eye and Ear Infirmary of Mount Sinai, allowing for enhanced Ophthalmologic and ENT clinical services, including a 24/7 eye trauma emergency department, and access to state-of-the-art imaging, pharmacy, and laboratory services. In the meantime, the current MSBI hospital and emergency department will remain fully open and accessible until the opening of the new hospital.

And a new rendering of this facility — this is the view of Second Avenue from 13th Street... showing existing structures as well as the revamped current facilities and new hospital... Also announced yesterday, more details about use of the former Rivington House:

The new facility, located at the site of the current Rivington House, will offer downtown residents a holistic approach to mental health and become a one-stop location for psychiatric, addiction, physical health, and social service needs. ... The site will not include methadone treatment services.

The sale of the Rivington House, a six-story, 119-year-old building at 45 Rivington St., "represents one of Mayor Bill de Blasio's biggest black eyes," as Gothamist once put it.

In February 2015, the Allure Group paid $28 million for the property, promising that 45 Rivington — the former Rivington Center for Nursing & Rehabilitation — would remain a health facility. In November 2015, a city agency lifted the the deed in exchange for the Allure Group's $16 million payment to the city. Allure then reportedly sold the property for $116 million to a development group with designs on a condoplex for the property that overlooks Sara S. Roosevelt Park, unleashing an outpouring of outrage.

In reporting on yesterday's expansion news, Crain's noted that since acquiring Beth Israel Medical Center in a deal with Continuum Health Partners in 2013, "Mount Sinai has lost a significant amount of money on the medical center's East Village and Brooklyn campuses." How much? "Those campuses lost $104.6 million last year on $904.9 million in operating revenue. That was an improvement from a $124.2 million loss in 2017."

Glad to hear Rivington House will be used as a health facility. Dare I say it's a good thing?

I want a hospital after St. Vincent and Beth Israel are gone..

Anonymous 12:22: NYU Hospital isn't far; when I passed a gallstone—and didn't know what was happening—I grabbed a cab there and got triaged in the ER right away.

Of course, if I had known it was a gallstone, I would have just sat and waited it out. Live and learn.

If there is ever anything remotely like at 9/11, downtown is screwed. No more St Vincent's. Cabrini and soon a skeleton of a Beth Israel.

Current residents on 13th street must be upset. Imagine a noisy busy hospital right next door to where you live. Forget about those parking spaces, they are all gone. Just imagine how 13th and 2nd ave will look. This area will look like trash, during construction and when the hospital is in operation.