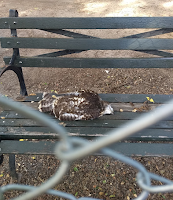 Rodenticide poisoning was cited as the cause of death for Amelia and Christo's chick, the one who was found unresponsive in early June. The result came from the New York State Department of Environmental Conservation, as Goggla reported.

Secondary rodenticide poisoning happens when the chicks are fed poisoned rats, mice or any other prey that has ingested rodenticide. The parents, Christo and Amelia, likely didn't eat the same food, or not as much of it, so didn't die. However, they are exposed to the same danger every time they eat.

The NYC Parks Department does not use rodenticide in Tompkins Square Park. However, it is used throughout the city and the hawks do not restrict their hunting to the park, so they can pick it up anywhere.

The Parks Department has been using dry ice to control rats in Tompkins Square. I think it's very effective and is not toxic to other animals, plants or people. However, if you look around the park or the streets of the East Village on any given day, there is trash and food everywhere. Until we, as a community, stop feeding the rats, nothing will change.

Both of Christo and Amelia's offspring died this year, the first at the end of May. (The body of the first chick was never found.) Both chicks presumably died from rodenticide poisoning.

In the past two years, Amelia and Christo have lost three of their four offspring. In 2018, the chick died from a combination of rodenticide and West Nile virus.
Posted by Grieve at 6:15 AM

That is heartbreaking. So sad. Poor bird :(

Until we, as a community, stop feeding the rats, nothing will change.

People don't get it; they figure that if a trash can is full, they can just leave their half-full cup/pizza box/food scraps on top of it to signal their intention of disposing of it. It's even worse when there's an event in the park.