Next steps in the plan to rebuild East River Park 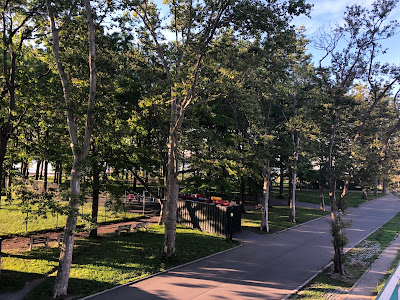 Under the current plan, now on tour through the city’s Uniform Land Use Review Procedure (ULURP), East River Park will close from March 2020 to (fingers crossed) summer 2023.

Aside from what city officials say will reduce flooding from coastal storms and the rise of sea level on the East Side, the all-new East River Park — elevated by eight feet — would include new amenities. 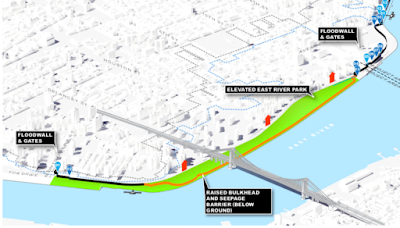 You can read about what transpired at the meeting via Gothamist ... and Curbed.

An excerpt from Gothamist:

“Whatever the park is giving us, you’re going to take it all away,” said Yvette Mercedes, a Baruch Houses resident, whose children play in the park. “We need fixing, but why do it all at once?”

The complete park closure, and health hazards brought on by the dumping of landfill are the two most contentious points among residents and city officials. Residents have also pled with city officials for a “greener” plan that is not only flood-safe, but environmentally friendly.

Though Manhattan Borough President Gale Brewer called for a two-month delay on the project’s Uniform Land Use Review Procedure, the Department of Design and Construction (DDC) first deputy commissioner Jamie Torres Springer said at the hearing that only the DEIS comment period will be extended for two weeks.

Ian Michaels, a spokesperson for the DDC said that the comment period for the DEIS, which has been open since April, will now be extended until Aug. 30.

Next up: The City Planning Commission hearing on July 31 at 10 a.m., at 120 Broadway. The final vote via City Council is expected in late September.

Meanwhile, City Limits took a deep dive on the issue leading up to Tuesday's meeting. It's a good primer for what has happened to date. Read that here.

Charles Krezell, the co-founder and president of LUNGS (Loisaida United Neighborhood Gardens), was in disbelief last fall when he heard about the city’s new plan. “No one was prepared for it,” he says.

He is unsure that this project can be completed in just three years and worried that it will stretch beyond the current terms of elected officials who will approve it, diffusing accountability. “No one else [in city office now] is going to be in office at that point, so it’s going to be very difficult, the city can walk away, the city can run out of money, anything can happen,” he says. “We can have a flood tomorrow, there’s no barrier to protect us from anything.”

RIP East River Park
Posted by Grieve at 10:00 AM