Local elected officials urge the DOT to explore bike lane options on Avenues A, B, C and D 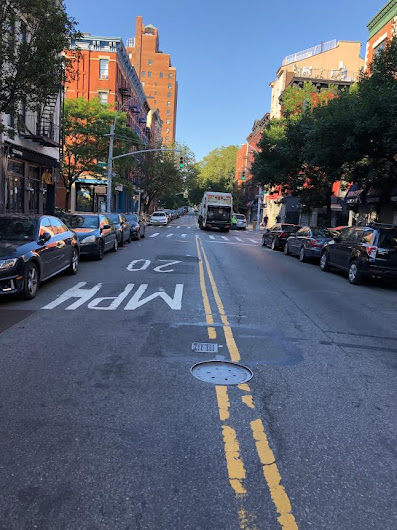 [Avenue B, currently without bike lanes]

The proposal for a two-way protected bike lane on Avenue B has turned into a broader exploration for better and safer passage for cyclists on Avenues A, B, C and D.

Last Wednesday, local elected officials sent a letter to Ed Pincar, the Department of Transportation's Manhattan borough commissioner, to expedite and expand on the installation of protected bike lanes on Avenues A-D "as a result of the fast approaching East River Coastal Resiliency (ESCR) Project."

Here's more from the letter:

"We would encourage you to look at Avenues A through D spanning from East Houston to 14th Street to determine the best location for a one or two-way bike lane, understanding the multiple needs of the city and the impacts these options may have for cyclists and the community.

These new protected bike lanes would serve as a vital alternative to the East River greenway, which is projected to close starting in 2020 during the ESCR project. Recent reports of cyclist accidents in the area suggest the increased safety that protected bike lanes will provide is urgently needed." 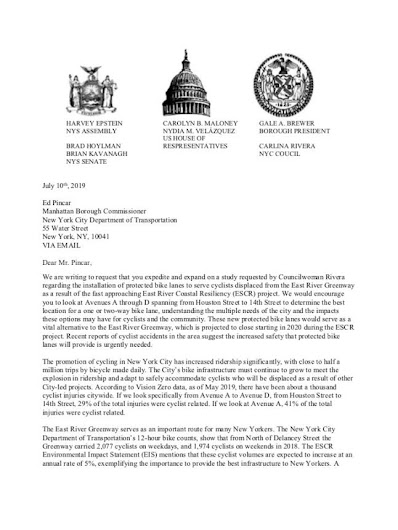 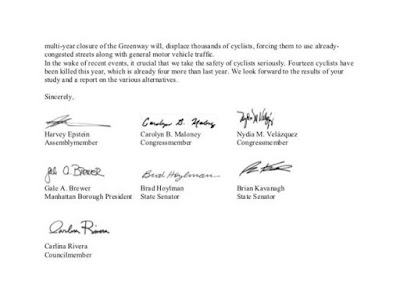 The parent-led campaign to secure two-way bike lanes on Avenue B, an increasingly congested 14-block corridor currently without any marked paths for cyclists, began in April. Bike-lane organizers say they now have the support of nearly 30 businesses along Avenue B.

In late June, Community Board 3 passed a resolution asking city officials to study safety issues and improve bike infrastructure on Avenue B, as Patch reported.

CB3 asks DOT to conduct a safety analysis and report back to CB3 about whether it is feasible to install a two-way protected bike lane or other bicycle safety improvements along Ave B from Houston to 14th St. CB3 also asks DOT to determine where truck loading/unloading zones should be installed along Avenue B, and report back to CB3 with a proposal.

The report to CB3 should also discuss any impacts of such installations to street-side parking, teacher parking, loading zones, and overall street congestion, especially during the weekend nightlife hours.


There aren't any marked bike lanes now on Avenue B. Meanwhile, Avenues A and C have white-painted bike lanes without any separation barriers such as on First and Second avenues. 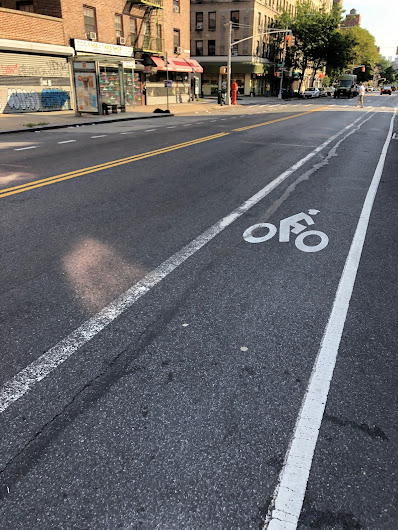 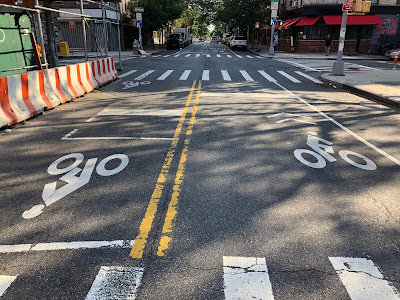 Avenue D does not currently have any markings for cyclists... 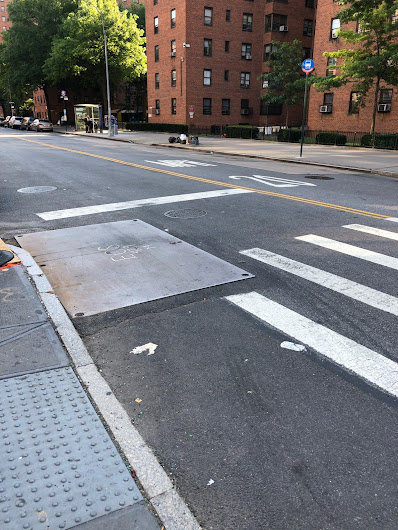 Bike advocates and elected officials have been urging the city to do more across NYC to ensure safer streets for pedestrians and cyclists — 15 of whom have been killed by drivers this year, five more than all of 2018.

Overall, there have been 110 road fatalities this year — an 18.3-percent increase over 2018, according to the DOT and as reported by Streetsblog. As of July 9, 56 pedestrians have been killed so far this year on NYC streets.

Mayor de Blasio recently ordered the NYPD and DOT to create emergency plans to protect cyclists. The DOT's plan is roughly due this coming week.
Posted by Grieve at 4:20 AM

Ave B is narrow enough already.

I'm still waiting for C. Rivera to answer my email WHY "Tech Center" contractors were allowed to block the sidewalk & push pedestrians into 14th St. Crickets. I did get her newsletter though so I know she got the email.

Avenue C bike markings look ore like the old chalk outlines they used to outline bodies. Seriously, the bike is supposed to be in the middle of the intersection in front of traffic? Do you think anyone in cars would stand for that when the light turns green?

Make all of the avenues one-way, then there will be space.

Why aren't the city Administrators worried about the increasingly dangerous situation for Pedestrians?

Not enough room on Avenue B for a bike lane.

Not understanding how it is OK to cut bus service - frequency and routes (not to mention increase fares)- but expand the cycling infrastructure?
Instead of NYC DOT resources spent for cycling, it could contribute to MTA mass transit funding. Or further to subsidizing mass transit for low income New Yorkers.

Plus little concern for pedestrians. In Manhattan cyclists blow through red lights and the wrong way. Pedestrians need protection from cyclists.....

I want to know why PROTECTING PEDESTRIANS is not *at least* as high a priority as protecting bike riders. Is it b/c pedestrians don't have any organizations or lobbyists to represent them? Yet EVERYONE is a pedestrian at some point pretty much every day.

2 things: All our pols assume that the East River Park will be closed for renovations. Funny since GBrewer put a moratorium on the question for 60 days. They trip over their own lies. Then they want the Aves to be evaluated for safer bike lanes. It's been shown that it is nearly impossible to protect cyclists from themselves. You don't need more space to ride on a sidewalk, run reds and go the wrong way up or down and Ave. Our pols are trying to distract the voters from the larger issue - the destruction of the park - East River and TSP. EMAIL. EMAIL. EMAIL. And we should send a FLASH MOB to their offices when the time comes. This is a perfect example of ONE PARTY RULE and its punitive effect on the community. EMAIL!

1.) Bike lanes improve safety for pedestrians as well as cyclists by making drivers go slower and be more attentive. This has been pretty extensively studied again and again.

and 3.), yeah, Ave. B as currently constituted is too narrow for a bike lane. Rip out a lane of useless car storage (essentially welfare for the mostly-rich who can afford to own a car in Manhattan) and voila! Problem solved. You can do the same on B, C and D. We don't need to subsidize parking for rich people with the lives of cyclists and pedestrians.

I think getting rid of parking on city streets downtown, restricting private vehicle use, and adding protected bike and bus lanes would be the best solution for pedestrians and city-dwellers as a whole.

The problem isn't bike vs traffic lanes, the problem is free public parking. Devote one side of the avenue to a protected bike lane and tax the cars parked on the other side. Manhattan is too crowded for all these free parking spaces.

Bikes are here to stay and only going to get more numerous. For every obnoxious entitled biker shouting at a jay walking pedestrian there are self appointed pedestrian wanna-be cops complaining loudly that a bike is drifting though a red light, threatening and inconveniencing nobody. Bikers and pedestrians will get more astute and adjust to less cars. Americans in general have no idea how to share public spaces. Check the density of bikes, cars and pedestrians interacting in for instance Beijing. No one hooked on outrage, everyone going their own way, the street self organizing.

The garbage truck situation on 10th street is more urgent than these bike lanes. Oh wait none of these politicians live on the block.

Misguided politically driven sentiments by our current electeds.
More "protected" bike lanes will not.lower the accident rates, but enforcement of reckless behavior WILL. (Ask someone who's gotten a ticket.) Something of which up until now, has been very minimal. And I'm speaking from experience as a life long nyc bicyclist.

As for taxing car owners, that's been happening for eons: it's called paying for your driver's license, plus paying for license plates & registration fees & insurance. Let me know when the bikers (who are getting off scot-free on these items) are ALSO getting taxed, b/c bikers are ALSO taking up publicly funded street space.

And are you sure that RICH people are the only owners of cars clogging the streets in alphabet city?

And finally: BEIJING? You want NYC to be more like BEIJING? Thanks but no thanks!

Yes, if you remove parking from one side

When have any pedestrians in the EV ever been killed by cyclists? Why do they need protection? I assure you cars are the danger here

Anon@2:14pm. In fact a pedestrian was killed by a speeding biker a few years ago in Central Park. The reason cars kill more than bikes is physics, F = M x A. HT: Izzy Newton.
I recently spent some time at 1st Ave. and 7th Street watching bikers go through the red light vs. drivers. The score was 20-0.
Question: how many cars have you seen driving on sidewalks or going the wrong way on a one-way street? I saw a biker earlier today going south on 1st Ave and one riding on the sidewalk.

Yes. The NYPD has got to step up and start ticketing reckless behavior, be it from: motorists, bicyclists, and pedestrians, whenever they spot it, not just when they're told to do it, temporarily, like this short term ticketing blitz.

How is TSP being destroyed??

AVe B does not need a bike lane, Jesus Christ. I ride my bike and feel safer NOT in a bike lane. Leave some neighborhood things alone, it is a narrow Ave and Ave C and A BOTH have bike lanes. Cars need to park, it's bad enough. The side of the road needs to have usage.

I live at E Houston & B and throwing more bike lanes around isn't the solution. Yes I want more bike safety and ride myself, but these streets are pretty chill and there's no room. Besides, who's going north on these streets - they dead end in Stuy Town and anyone going anywhere cuts over to the 1st Ave bike lane to get above 14th.