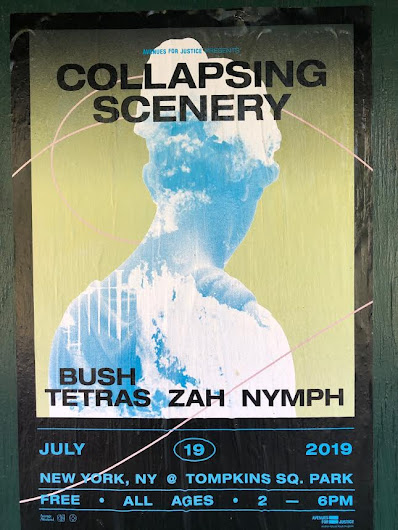 The duo, Don Devore and Reggie Debris, released their latest album, Stress Positions, on June 28. As Brooklyn Vegan described the LP: "It’s quite the gonzo record that mixes post-punk, shoegaze, hip hop, dance music and more into one heady cocktail."

Also on the bill: LES no-wave legends Bush Tetras (who are releasing a new 7-inch single this month) as well as ZAH and Nymph. The show is scheduled from 2-6 p.m.

The show is also a benefit for Avenues For Justice, formerly the Andrew Glover Youth Program, around the corner from the Park on Avenue B. As amNY recently put it, Avenues for Justice is "a court advocacy program dedicated to rescuing New Yorkers in their teens and early 20s from the soul-crushing spiral of incarceration."
Posted by Grieve at 4:30 AM

Later after this, on Friday night, there's a big ska fest at the Gramercy Theatre on East 23rd--
RADICSFEST featuring: