The Village East screening Quentin Tarantino's 'Once Upon a Time ... In Hollywood' in 70mm 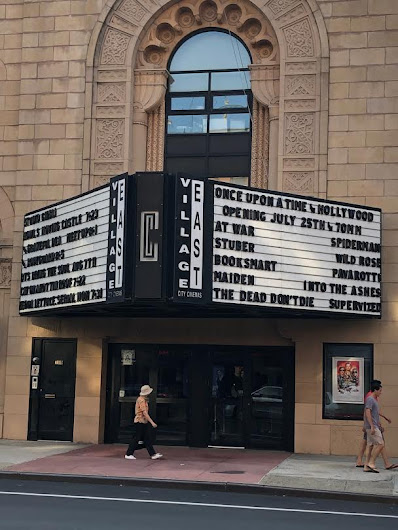 When Quentin Tarantino's "Once Upon a Time ... In Hollywood" opens tomorrow (July 25) at City Cinemas Village East, it will be just one of five theaters in the country to show the film in 70mm.

Tarantino's well-reviewed ode to 1960s Los Angeles and the movie industry stars Leonardo DiCaprio, Margot Robbie, Brad Pitt and Al Pacino, among others... and it continues the filmmaker's commitment to celluloid. (Here's a 70mm explainer.)

His last film, "The Hateful Eight," also played here in 70mm in the Village East's Jaffe Art Theatre. ("The Master," Dunkirk" and "2001: A Space Odyssey" are other films to screen here in recent years in 70mm.)

You can find ticket info for the theater, Second Avenue at 12th Street, at this link.
Posted by Grieve at 4:00 AM

Is this one of the theaters where I have to register where I'm sitting with the surveillance state?

I saw “The Hateful Eight” here in 70mm and it was gorgeous! It was screened with an (recorded) orchestral prelude and a 15 intermission. Glorious