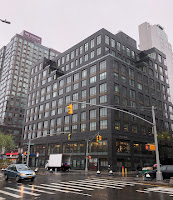 Developer Ben Shaoul and company have reportedly sold the retail space of its gold-dusted condoplex at 196 Orchard St. — whoa, brace! — for $88.75 million.

That's three retail tenants in total — the Marshalls, the coming-soon CVS and the Equinox on the upper two floors here along Houston between Ludlow and Orchard.

The Real Deal has the story:

The developers behind 196 Orchard Street, Ben Shaoul’s Magnum Management and Michael Miller’s Real Estate Equities Corp., sold the retail portion of the building to the AR Global affiliate New York City REIT, sources told The Real Deal. The sale price is $88.75 million, which makes it the most expensive deal for a retail condo in more than two years.

The deal is the most expensive sale of a retail condo since Savanna sold the retail portion of 10 Madison Square west for $97.5 million in the spring of 2017 to TH Real Estate (now Nuveen Real Estate).

This property here previously housed a single row of storefronts, including Ray's Pizza, Bereket and Lobster Joint. As Shaoul told the Times back in 2017, the small businesses that closed were "part of evolution ... You call it gentrification, I call it 'cleaning it up.'"

Shaoul and REEC bought the air rights from Katz's next door to help make this condoplex a reality.
Posted by Grieve at 4:00 AM

I want to vomit my lunch.

"Cleaning it up" would entail Shaoul and his longtime shady business practices being thoroughly investigated, Croman-style. This current deal of his screams money laundering. I guess evicting a bunch of 85-year-olds from their home in the old Cabrini was "cleaning it up" also? It's regrettable that the NY Times and others continue to sing the praises of this notoriously abusive landlord and developer, who has repeatedly inflicted harm on the East Village community for purely selfish financial motives, while avoiding serious scrutiny.

And yet Shaoul is probably crying to The State that the new laws that protect tenants will prevent him from even maintaining his shitty buildings.

How does one sell just the retail part of a building? Why is such a thing even allowed?