Diversions: the trailer for Martin Scorsese's 'The Irishman' 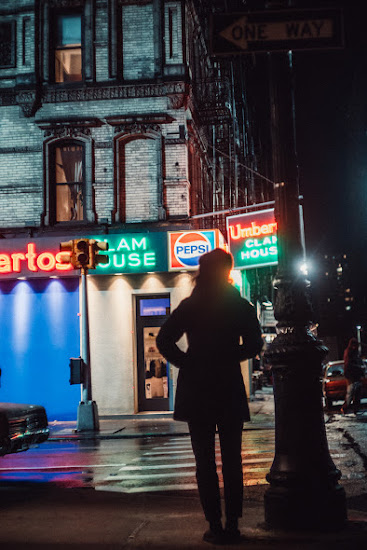 Back in November 2017, EVG regular Dan Efram documented how the crew for Martin Scorsese's "The Irishman" transformed the corner of Orchard and Broome into 1970s-era Little Italy. (You may revisit that post here.)

Anyway, "The Irishman" — via Netflix — is set to world premiere as the opening night selection at the 2019 New York Film Festival.

And earlier today, the film's first trailer arrived. Here's the set-up via IndieWire:

“The Irishman,” based on Charles Brandt’s book “I Heard You Paint Houses,” reunites Scorsese with his former muse Robert De Niro and his “Goodfellas” Oscar winner Joe Pesci. The gangster movie also stars Al Pacino, who has never worked with Scorsese until now.

Previously on EV Grieve:
A look at Orchard Street's transformation into the 1970s for Martin Scorsese's Jimmy Hoffa film
Posted by Grieve at 7:00 PM

Ohh wow this looks like fun!! Why couldn't Marty find a roll for Leo deCaprio though, best actor of our generation and he's to dreamy!!!

I stopped watching Scorsese's movie years ago, not because the quality had fallen but the violence kept rising. He's fascinated or obsessed with criminals, their psychosis, and their ultimate expression of themselves in violence and murder. The brilliante "Vinyl" was plagued by a mobster storyline which did not need to be there.

beating the same dead horse over and over