Chinese Graffiti has not been open lately on Avenue A 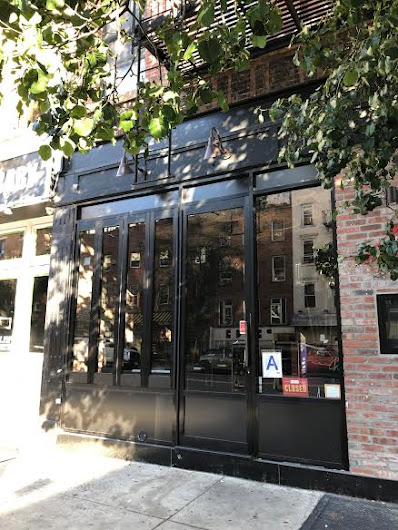 Multiple readers have noted that Chinese Graffiti has not been open during announced business hours of late. They were closed the past two weekends.

There isn't any message on the door here at 171 Avenue A about a closure — temporary or permanent. Yelp lists the Asian-American gastropub as closed as does Resy. Chinese Graffiti's phone is not in service and its website is offline. Nothing on its social media properties either.

No. 171 may be ready for doomed restaurant location status. Recent ventures here include Chao Chao, which closed without any notice to patrons in May 2017 after six months in business. Chao Chao evolved from Soothsayer, which opened in January 2016. Soothsayer, from the same operators, also closed without any notice to patrons at the end of September 2016.

And because someone always brings this up... No. 171 was once the home of Rat Cage Records and 171A, the illegal club-turned-rehearsal studio that produced records by Bad Brains and the "Polly Wog Stew" EP by the Beastie Boys.
Posted by Grieve at 4:05 AM

I lived in this building for 13 years. From 2004-2017 it was nearly a half dozen places, Alphabet Kitchen, a seafood restaurant, BadBurger, Soothsayer, Chao Chao, etc.

Of course, before Westville went in next door, that space was also everything before finally finding the right vendor.

Hopefully 171 will find it. Else, I call it the ghost of Bad Brains!

They're competing against The Tang and Mala Project on 1st Ave except their food is less flavorful and double the price, so this is no surprise. It's not the location, it's the restaurant.

Food was *way* too expensive.