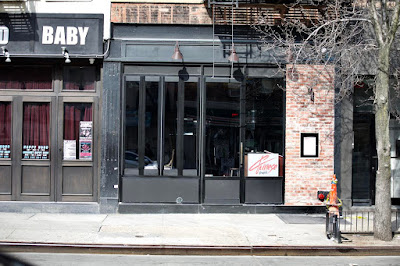 In other new openings, Chinese Graffiti debuted last Friday at 171 Avenue A between 10th Street and 11th Street.

The restaurant, described as an Asian-American gastropub, is open for now from 5-11 p.m. Monday-Wednesday; until midnight Thursday-Saturday.

Here's a look at the menu on display... 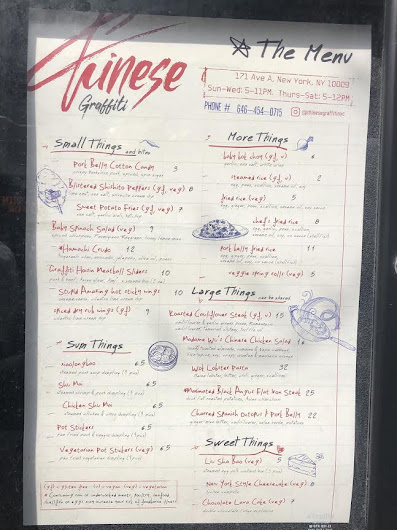 You can find some food shots on the Chinese Graffiti Instagram account here. No word at this moment who's behind this venture.

And because someone will bring it up... No. 171 was once the onetime home of Rat Cage Records and 171A, the illegal club-turned-rehearsal studio that produced records by Bad Brains and the "Polly Wog Stew" EP by the Beastie Boys.

Previously on EV Grieve:
A quick look inside the new restaurant coming to 171 Avenue A
Posted by Grieve at 4:02 AM

The menu isn't jarring on the eyes. Nope.

Wish them the best. This space , the space directly across the street from TSB , and the space next door to TSB, have turned over a combined 12 times in the 7 years we've been on the block. Here's my advice to them: Don't accept credit cards. The greatest scam perpitrated against Mom and Pop's over the past 20 years is that you need to kick 4pct of net towards bank expansion. Worse when they have 'rewards cards.' 'cause guess who's really paying for those rewards? (Hint: It ain't AMEX. ) It's a scam. You don't need it. Go ask Frankie on 2nd Ave. Put that money towards your huge rent and payroll. Secondly, don't fall for the 'branding scam.' You're not a brand. You're a small local restaurant. No need to plaster your name all over bags, cups, and any other nonsense people tell you has to be branded. The sh$t goes in the garbage so pay 4x less and keep it plain. Three, don't hire a PR or social media person. Total waste of money. Instead of screaming all over the internet about how great you are , DO A GOOD JOB day in and day out. Your guests will handle the PR for you. Trust me. It's all BS. They'll try to convince you that you need to do these things. Don't. No one is spending more money because they can put it on a card. The branded bag is going in the trash and no one is looking at it on the way there. No one cares what you're posting on Facebook. No ones coming because they read about you on an in flight mag. And Instagram won't help you if you're food stinks. Do a good job day in and day out. I wish you the best. It would be nice for Westville and TSB to have another long term neighbor.

Amazing post Chris! Westville space was also a revolving door until they came in. You're 100% right the other spots on the block that came and went because they didn't have a great product or latch on with the regulars and locals, and you can only do so much bridge and tunnel business.

Look at how well Boris & Horton are doing, and Mikey Likes It. It can be done!