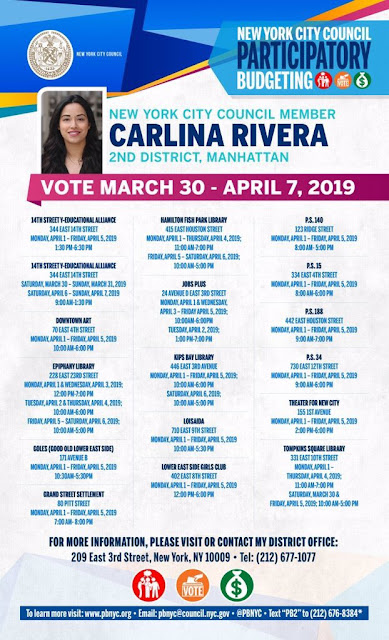 To celebrate the start of Vote Week, Rivera is hosting a PB Vote Week Kick Off tomorrow (Saturday!) at the LES Girls Club (402 E. Eighth St. at Avenue D) from noon to 3:30 p.m. Individuals interested in attending the celebration can RSVP online by going to this link or calling her office at (212) 677-1077.

At the event, residents will get the opportunity to learn about all the Participatory Budgeting projects on the ballot and vote for their favorite projects. PB allows for residents to decide how to spend capital funds, allocated by the Council Member, for community improvements. This year, out of the 135 ideas submitted, 11 projects were placed on the final PB ballot. (Up to $1 million of projects will be funded based on the votes of residents.)

· Street resurfacing district-wide
Many of the roads are in bad condition, and constituents are seeking road resurfacing throughout the district.
Estimated cost: $250,000 per lane mile

Residents who live in District 2 and are older than 11 years of age can vote for up to five of the 11 ideas on the ballot.


Rivera's office will have specific sites set up throughout District 2 where residents will be able to vote (the image at top of this post has the locations). Residents can also vote online at pbnyc.org/vote (note – the link will go live at 12:01 a.m. tomorrow).
Posted by Grieve at 12:30 PM

The playground renovations costs have to be padded - monkey bars and a slide don't cost half a million dollars - I'm beginning to think libertarian, maybe an option "Return these funds to taxpayers who paid them" should be available

225k for an iron fence for a garden... 200k for electronic, all-weather countdown clocks for stops that might not exist after SBS. yep, sounds like new york government to me.

If Rivera has $1 million to allocate, then the funding is pretty much used up with two or three projects. No doubt there is padding in the proposals. Perhaps Rivera's staff should have set limits (caps) on the proposals so that many smaller projects / needs could have been addressed. Some of these proposals, if evaluated and deemed appropriate should be funded by city-wide funds. Repaving streets, for example, should not come from a council person's discretionary budget.

As long as we can save those bus routes, it would be great to have countdown clocks at each stop, especially to inform people who don't have smartphones and can't check on the MTA app.

These prices are fucking outrageous

500K for a basketball court UPGRADE? How much does it cost to build one from scratch? Mind boggling.

Too bad Rivera didn't let us vote for what we REALLY wanted re: the Tech Hub! Sorry, Carlina-the-Traitor, too little, too late.

A $tupid wa$te of taxpeyer$' $$$. Also, the Riis Houses, etc. should be privatizzed and owned by the people who live in them. Give them a long-term (like forever) property tax abatement, and let them be owner$ without taxpayer$ having to foot the bill. This would incentivize them to kick out the druggies and gunnies.
So yes, get with liberty and libertarianism.
Bill, anarchist and libertarian

looking at theses $$$$ what are they approving ..someone should audit the bids and the people approving them...