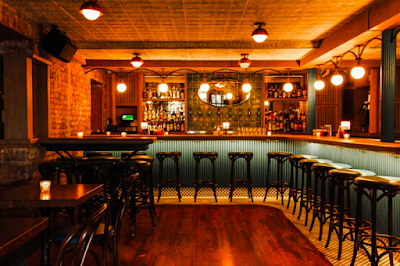 Paper Daisy is now up and running (as of last Thursday) at 41 St. Mark's Place just east of Second Avenue.

The cocktail bar in the former Cafe Orlin space includes the second East Village outpost of C & B Cafe, which opened its quick-serve breakfast-and-lunch operation on Feb. 28. (The original C & B location remains in service on Seventh Street near Avenue B.)

Here's some info taken from the Paper Daisy opening notice via the EVG inbox...

Paper Daisy takes its name from a Beat Generation poem — "Pull My Daisy" — by Jack Kerouac, Allen Ginsberg, and Neal Cassady when they were together in New York in the ‘40s.

"We thought the free form, collaborative, and tongue-in-cheek nature of the poem was a great way to anchor what we want out of this space," says Felber. "We know how beloved Orlin was. We would only ever put out a product that we care about, are proud of, and believe will add to the neighborhood. It’s our way of paying homage to what was."

Yosi Ohayon, the former owner of Cafe Orlin and the building owner of 41 St. Mark’s Place says, "When I opened this place over 36 years ago, it was so exciting to me to be a part of the fabric of New York City’s dynamic food and beverage scene. I’m ready to retire this part of my life. ... I wanted to pass the space on to someone who lived and knew the neighborhood, who would care about the space the way I did."

Owner Darin Rubell adds, "I was a regular at Orlin my entire life. I grew up just a few blocks from here and I have always admired how this space has been a real home to the diversity that is the East Village."

Before Paper Daisy emerged, the space was expected to be Joya Loves Louie, a vegetarian cafe-market-bar combo, as New York magazine first reported.

Cafe Orlin closed in October 2017 after 36 years at the address.

C&B Cafe debuts outpost on St. Mark's Place
Posted by Grieve at 4:10 AM

I was very sorry to see Orlin go, as I was a customer practically from day one. But the day to day stresses of running a restaurant in Manhattan can eventually become too much, and sometimes people just want to retire. (Like the late lamented Open Pantry grocery store, just a couple of blocks north, on 2nd Ave.) This is natural, and (thankfully) two examples in our neighbor hood of businesses that weren't driven out by greed, but by the decision that, "I'd just like to do something else now." Understandable, and I wish them the best.