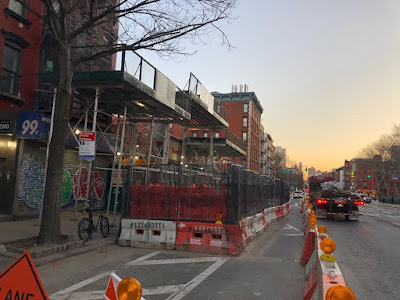 An EVG reader who lives near 75 First Ave. between Fourth Street and Fifth Street has reported activity again on the property.

A few workers were spotted at the stalled site with a delivery.

As previously reported, the future home to an 8-floor, 22-unit condoplex has been quiet for the past 14 months... ever since the DOB issued a Stop Work Order here on Jan. 11, 2018. (That Stop Work Order — "no protection for pedestrians" — was fully rescinded on Feb. 7.)

The previous post has more history about the project, which broke ground in September 2016. 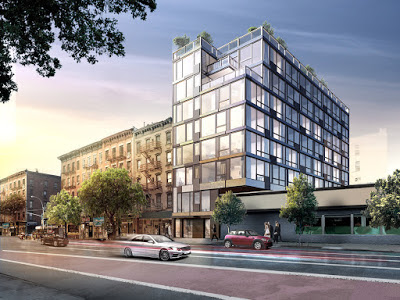 Oh, yes... They're pounding and drilling every day promptly at 7:00.

No grand pianos or heavy, full-sized refrigerators will be allowed on the over-hanging north side of any of these units. Parties are of course allowed, but guests must gravitate toward the south side at all times. If people follow these simple guidelines, everything will be fine.

Does anyone know when the construction of this unit is scheduled to be completed?

I heard it is supposed to be completed in two years. So, that should be fun for all of us who live nearby :)