Report: No plans to remove the Michael Jackson mural from the wall on 11th Street 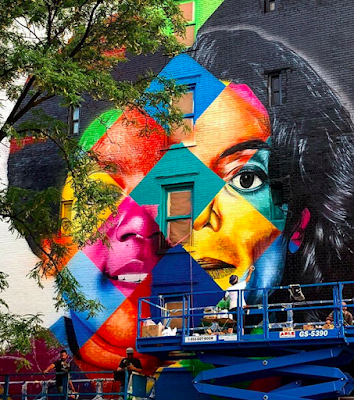 However, as Rolling Stone reported yesterday, despite the horrific allegations, "Michael Jackson’s posthumous career is showing few signs of major distress" since the documentary debuted two weeks ago.

Time Out reached out to Eduardo Kobra, the prolific Brazilian artist, to see if he might have any thoughts about removing the two Michaels mural that he created last July on 11th Street at First Avenue.

"I decided to keep the mural on, for a few reasons:

First, because the mural itself is not a simple tribute to MJ. My entire idea was to show the transformations he went through during his entire life: from black to white, kid to adult, from natural to unnatural. The whole project that I did in NYC last year was about peace, and in that mural in particular I was trying to describe that people sometimes have to go through so much to be able to reach their own peace of mind.. and even then, sometimes doesn’t matter what people do, they can never reach that peace.

In the second place, I believe MJ is part of American History, and also part of the world’s music history. You can catalog music Before and After MJ, so much was his influence. He still is the biggest pop star that has ever lived, and that we have ever seen, and I believe we are never going to see another pop star like him again.

Therefore, we can’t just erase him from history. These new allegations can be true or not. It is not up to me to judge if MJ is guilty or not — and now, since he is dead, he won’t be judged by justice anymore. So I really hope that mural can do it’s part and bring us to think about it all and how we, as persons and as a community, will deal with this new fact concerning MJ’s life.

Hopefully this discussion leads us all to the desire to be a better person everyday."

I haven't heard of any movements to have the mural removed... other than a few Facebook posts where people opined that it was time for this to go — especially given that it faces the Asher Levy School.

I live there; I wish it was gone. It's been up for nearly a year. Isn't that enough? MJ has zero relationship to this 'hood.

How do you explain to the kids at the school across the street about why this tribute to MJ remains?

Is this one of Jared Kushner's Westminster buildings?

I realized recently that the Run DMC mural this artist also did on 12th and A is on one of Kushner's Westminster buildings. I was wondering how the guys would feel about that!

I understand what the artist is going for, but biggest pop star ever lived? No! I think the Beatles and/or Elvis had incomparably more influence. Michael Jackson had huge hits but who in music has he really influenced, besides Chris Brown, and maybe Rockwell?

The moment this mural went up I had a bad feeling. I really respect Kobra and his artwork. It's objectively excellently executed. But 1. MJ has nothing to do with NYC, or EV. We have so many local artists, pop-culture movers, and heroines - why not make this a Patti Smith tribute? Or literally any other major icon that's actually contributed to the neighborhood? 2. The mural is triggering. As a survivor of childhood assault, it sent chills down my spine the first time I saw it finished, well before the doc was released. It is aggressively dominant and creepy. The way that the face peers out when you walk down 1st is horrifying. I try to avoid walking this way (and stopped visiting some of my favorite local businesses) because I want to avoid it. It's a really unfortunate addition. And lastly - why does Kobra get so much representation in NY to begin with? There are at least 10 large scale murals of his in major downtown areas - do we really not have local artists, that deserve that exposure and actually maintain community discourse, that can be represented here? C'mon.

Very interesting. How many of you pearl clutchers have the same visceral response to the Lenin statue in the neighborhood? Surely starving and murdering 10 million people outweighs whatever Wacko Jacko did?

What are we going to do...take back the music... the choreography... the concerts... the memories?

I respect the artist for standing behind his work. I also have a great deal of empathy for the side of Michael Jackson that was a good person, the incredibly gifted child we saw grow up to become the world's greatest entertainer. But when I think of Michael Jackson, damaged is the first word that comes to mind, not peace.

He had body dysmorphia of epic proportions, all but destroyed his face, spoke like a child, formed unhealthy relationships with children, and lived secluded in a theme park where he was surrounded, again, mostly by children. This isn't natural, normal or even remotely healthy. It's an episode of Criminal Minds.

Michael Jackson shouldn't be erased from history, and art can be a very useful tool to untangle the complicated legacy he leaves behind, but that's not happening here. It's showing one facet at the expense of the other facets, including victims of child abuse everywhere who see this and think "nobody will believe me."

A Michael Jackson mural looming over children at play wouldn't be my first choice as the curator of this space, but who knows, maybe it will get people talking about child abuse and something good can come of it.

Remove it from the East Village. He can stay in the history books with Lenin but we don't need his face(s) in our faces everyday when what he did is too close to us now. UGH. Disgraceful and disrespectful for victims and anyone who's ever been abused, emotionally, physically, or otherwise. TAKE IT DOWN. NOW.

Also the Lenin statue is at the very least out of eye-line when you're walking through the neighborhood. This mural is unavoidable.

The Forbes article debunking the guy behind that stupid documentary is all you need to read:

"The media’s largely uncritical, de-contextualized takes out of Sundance seem to have forgotten: no allegations have been more publicly scrutinized than those against Michael Jackson. They elicited a two-year feeding frenzy in the mid-90s and then again in the mid-2000s, when Jackson faced an exhaustive criminal trial. His homes were ransacked in two unannounced raids by law enforcement. Nothing incriminating was found. Jackson was acquitted of all charges in 2005 by a conservative Santa Maria jury. The FBI, likewise, conducted a thorough investigation. Its 300-page file on the pop star, released under the Freedom of Information Act, found no evidence of wrongdoing."

@Shawn G. Chittle: You should watch the documentary. It shows how sexual abuse affects and permeates the victim's entire being and by extension their families. Also how the victims were able to first support Jackson and then finally, over time and a LOT of therapy, to realize the damage. And only when they had sons themselves did they realize they needed help. They loved him but also lived with the trauma and hated him for what he did to the them as children. It also shows how careful Michael Jackson was not to leave ANY clues or evidence lying open around his home. This documentary wasn't just about Jackson. It taught us what sexual abuse does and how our society is not dealing with it very well, and in some cases, at all.

Other items described in court filings (contained within the same document stack):

Book: ‘Boys Will be Boys,’ contains full frontal nudity of boys under the age of 14; personally inscribed by Michael Jackson.

Book: ‘In Search of Young Beauty,’ containing pictures of children, boys and girls, some nude.

Book: ‘The Boy, a Photographic Essay,’ containing images of boys, some nude.

Photograph: Noted in the document as ‘believed to be Jonathan Spence; fully nude.’ [WHY WOULD MICHAEL JACKSON HAVE A NAKED PHOTO OF HIS CHILD ACCUSER!?!]

Also worth noting: The 'Boys Will Be Boys' book has an inscription written by MJ himself. This book was edited by Georges St. Martin pseudonym of Martin Swithinbank and Ronald C. Nelson is the pseudonym of Ronald Drew. Both of these men were convicted pedophiles and Martin Swithbank was a major contributor to NAMBLA.

This book according to Bill Dworin (lead investigator in the 1993 allegations) is a book that has been seized many times in the homes of convicted pedophiles. Mr. Dworin explains that although this book is legal to own that in the hands of a child predator it becomes child erotica. The book is described as having boys being shown in various activities and most of these boys are naked. Again what cannot be stressed enough is that these images were hand picked by two convicted pedophiles to appeal to other pedophiles.

Anytime, Notorious. And anything to combat ignorance. I guess that's one of the reasons sex abuse continues. It's all so sad.

Per the Forbes piece, "While the documentary is obviously emotionally disturbing given the content, it presents no new evidence." I disagree.

The documentary shows, in great detail, how Jackson groomed both the children and their families. It's disturbing how good he is at it. The daily eight hour phone calls he with the children, the request he made to have one of the kids live with him for a year, it goes on and on and on. Wade and James, particularly James who looks like he spends every waking hour of his life crying, are still trying to undo the psychological damage Jackson did to them. They're not acting.

This denial and flawed fan boy logic that, because he was talented, he couldn't possibly have been a child molester. He was textbook.

perfect statament. Regardless, seperate the art from the artist!

Michael Jackson was a pedophile - REMOVE THE DAMN MURAL. Unless you are cool with him molesting boys.

That won't happen no matter how much you wish that. Me and most others believe he was innocent and that's final. He didn't do anything other than spread happiness to the world here, so please stop with this nonsense.