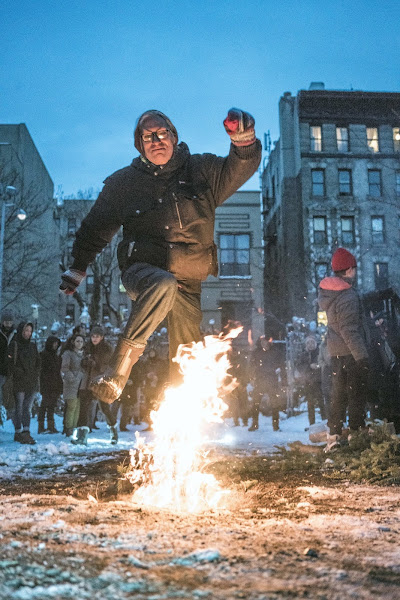 Here's a recap via the EVG inbox...

Jumping over fire is a symbolic gesture to start a fresh new year. This tradition is celebrated for ringing in the Persian New Year and has been celebrated since at least 1700 BCE of the early Zoroastrian era. There will be music, dancing and snacks; wear your best fire-proof pants.

The Rude Mechanical Orchestra will also be playing.

The event is in a different location this year with the new-fence installation underway at La Plaza Cultural Community Garden on Avenue C and Ninth Street.

I reached out to Simin Farkhondeh, a community activist and professor at the School of Visual Arts, who has choreographed and produced the event since its inception here. I started by asking her if the new location might pose any addition challenges. She also provided more background as well as her fire-jumping experiences growing up in her native Iran...

For me, this event is very spontaneous each year. It comes together because the community loves it. The very first time I did it was 2010 and people came to the garden, helped make the fires and we jumped and had a wonderfully freeing time doing it.

This year will be like every year and the change of space should not impact the experience. We strive to make it a powerful and fun and safe event.

It will be the 10th time I've worked on having this spiritually elevating, spring welcoming event. The way I experienced it in my youth, in Iran, was as a spontaneous event that the community felt necessary to do to welcome and get ready for spring. It was done without permits from any government entity or such. We would go out into the street and community members would gather tumbleweed and build fire's together. Then we would jump over them.

On my street, we had about 15 fires, from the entry of our street, down to the end of it. All the neighbors would come out. It was an energizing, freeing experience and community building, and that spirit is what I've tried to preserve each year.

It is clear that this exhilarating event speaks to people not only who come from the Zoroastrian tradition but also brings together folks from across the spectrum of cultures. What binds us is the connection to the earth and the elements.

As in past years, many people and groups are helping ... The folks from the Fireman's Garden, who have been at our event and cherish it, have generously offered their garden to us. A lot of expats from the various Middle-Eastern communities, including Armenians, Iranians and Afghans, are going to be there as well as the folks from MoRUS and Time's UP, who in the past two years have helped a great deal to make this happen.

As in the past years, the event is organized to be a lot of fun, but also safe for all members of the community, especially children and families. As in every year, I plan to have the customary dried fruit and nuts available for people to enjoy. Since about five years now, there also has been a band present at some point of the evening, so we can dance and be merry after jumping the fires and cleansing our souls from the winter blues and from last year's troubles.

Wednesday, March 20, is the vernal equinox, which marks the beginning of spring and Nowruz or New Year for people of Iran, Afghanistan and other places. We will be making ourselves ready for that.

There's something really lovely about having this at the Fireman's Garden, which commemorates a fireman lost to a tenement blaze back in the '70s, when there was nearly always a building burning somewhere in the nabe (a lot of it due to arson). All the gardens are symbols of phoenix-like rebirth from that time, but the Fireman's Garden is particularly so. What better place to bring in spring?