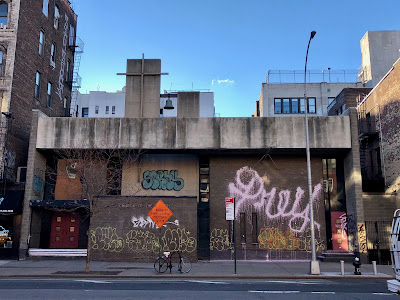 ICYMI from Thursday ... Elizabeth Kim at Gothamist has a feature on the Cooper Square Community Land Trust's efforts to buy the Church of the Nativity on Second Avenue for use as low-income housing.

The land trust proposed a price of $18.5 million. Of that amount, $5 million would be paid to the archdiocese upon closing. The remainder, which would use a combination of federal tax credits and state and local funding, would be paid in installments over a 20-year period.

David Brown, the church’s director of real estate, told Val Orselli [a project director with Cooper Square Community Land Trust] he would get back to him.

Several months later, Orselli returned to Brown's office. In a show of support, representatives of city councilmembers Carlina Rivera and Margaret Chin, as well as the Manhattan regional representative from Governor Andrew Cuomo’s office, accompanied him.

But Brown was unmoved. The offer was insufficient, he told them. Among the sticking points was the land trust’s inability to pay upfront.

“He told me, ‘A dollar today is worth more than a dollar tomorrow,'” Orselli recalled.

Orselli took the rejection as a sign that the church, a tax-exempt institution, was more interested in getting top dollar for its property, which has been estimated as being worth as much as $50 million.

“I was a bit naive,” he said. Referring to the land trust’s pitch to do something with the property that was aligned with papal doctrines, he added, “They couldn’t care less.”

The Church closed after a service on July 31, 2015, merging with Most Holy Redeemer on Third Street. In the summer of 2017, the archdiocese desacralized the former church, clearing the way for a potential sale of the desirable property.

The Cooper Square Community Land Trust is currently organizing a town hall this May with Community Board 3 to discuss "how decommissioned churches can be best utilized by the Archdiocese and the communities they once served." Something other than demolishing them to make way for ultra-luxury condos.

Meanwhile, as Curbed reported in February, the Archdiocese of New York is considering a proposal to turn the 300,000-square-foot property that housed Saint Emeric on 13th Street, which includes a former school, over to a land trust for 400 units of below-market-rate housing.

Previously on EV Grieve:
Looking at the Church of Saint Emeric on East 13th Street

Educator: Turning the former Church of the Nativity into luxury housing would be a 'sordid use' of the property
Posted by Grieve at 9:38 AM

Email ThisBlogThis!Share to TwitterShare to FacebookShare to Pinterest
Labels: Church of the Nativity, The Church of the Most Holy Redeemer

Politically I believe the Church has the right to make as much money from the sale as possible. The money is then given to the local parishes. And they are trying to build 300 low income apts on 13th Street.

What I don't get... is that Chin voted to turn an open park into housing in Soho. Rivera votes to rezone us into hell and says little or nothing about luxury housing at the Boys' Club site ... Now Chin/Rivera care about low income housing at the Nativity site but not at the Boys' Club site. one party rule. one party rule. Are they a bit inconsistent... or are they consistent with helping Mayor Bill collect party donations? Just confused... just asking.

Hmmm, let's guess what will happen....and lets be conspiracy theorists here instead of theologians. Some money will flow along some pipeline somewhere and lo and behold, and I do not mean Behold like in The Bible....we will see a Tower of Babel rising on this spot....but mostly the language spoken will be Green.
Watch what the Mayor, The City Planning Commission and the Local Community Board let happen here. Taking bets? I'm in...where can I put a five spot down?

*anything* is better than that building. Truly the ugliest structure in the east village. I'll take luxury condos if necessary, just make it fast.

@cmarrtyy: "Politically I believe the Church has the right to make as much money from the sale as possible. The money is then given to the local parishes."

WOW, if you actually believe the $$$ is given to the "local parishes" you are the most gullible person on Manhattan Island, my friend. And I say that as a Catholic who's in church regularly & who has watched other parishes disappear. The $$$ goes to pay off sexual abuse lawsuits, or to fluff up Cardinal Dolan's pet projects.

Local parishes are the LAST thing on Cardinal Dolan's mind, except for the Annual Cardinal's Appeal - which sounds like ordinary fund-raising, but no, it's really a TAX on each parish. Then Dolan focuses on each parish - and each parish is TOLD how much they are expected to raise. Most are falling well short of Dolan's "shake-down" amounts.

Dolan doesn't want to acknowledge that while people may still be in the pews, they are NOT putting $$ into the collection basket, nor signing on for a "pledge" to the Annual Cardinal's Appeal.

Just take a look at what has been built where St. Ann's used to be on 12th St. (now an NYU dorm), or where Mary Help of Christians used to be (pricey condos). Look up how much Dolan got for those properties. Now envision what Dolan would want from the Church of the Nativity property.

I consider that Cardinal Dolan is in the real estate business, NOT in the business of religion. And of course he's buddies with the mayor and with the developers who LOVE to put up a good, tall, money-making building.

As much as I don't want it to turn into lux housing, I really dont think Nativity NYC cares so much about the building, which has been in this poor state for years.