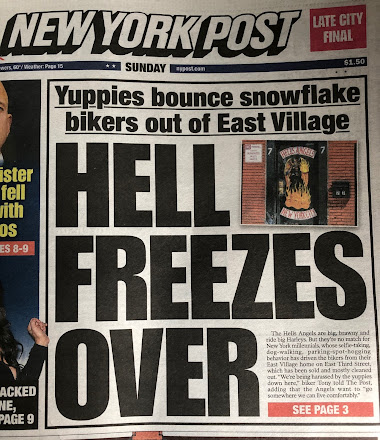 The Hells Angels get the tabloid treatment today over at the Post... giving the bikers the wood about their move away from Third Street between First Avenue and Second Avenue.

“We’re being harassed by the yuppies down here [who are] sitting on our bikes and pissing on the sidewalk,” griped one burly biker outside the infamous motorcycle gang’s clubhouse at 77 E. Third St., which has been sold and mostly cleaned out.

“When the neighborhood was s–t, nobody minded us because we kept the place clean,” the biker, Tony, continued. “It comes a point where it’s useless to be down here because of the harassment. [We want to] go somewhere we can live comfortably.”

Tony, who once lived in the HQ and is now homeless, turned up at the all-but-abandoned bunker last week for a meeting with the building’s buyer, Nathan Blatter of Whitestone Realty.

Blatter told the tabloid that a deal hasn't been finalized yet.

And where will the members go? Per the Post: "The gang hopes to relocate to a neighborhood where they won’t be bothered by Starbucks traffic, pushy tourists and nosy cops."

The Hells Angels have had a presence on Third Street since 1969. They eventually bought the six-floor building, which includes their clubhouse and member residences, from Birdie Ruderman in the Bronx for $1,900, according to public records.

Previously (and exclusively) on EV Grieve:
After 50 years on the block, the Hells Angels appear to be selling their 3rd Street clubhouse
Posted by Grieve at 9:15 AM

As a LIFELONG resident...GOOD RIDDANCE!

FYI "Lifelong Resident" You're next. The Post calling the Angels "snowflakes" may not have been such a good idea. "When in doubt knock em out"

"The gang hopes to relocate to a neighborhood where they won’t be bothered by Starbucks traffic, pushy tourists and nosy cops."

I sincerely hope they enjoy their new home in Wyoming.