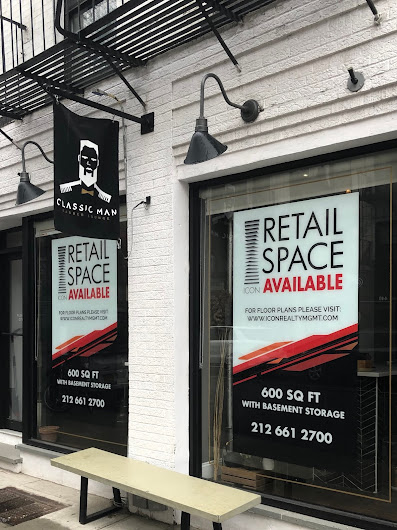 For rent signs arrived yesterday at the Classic Man Barber Lounge, which had been closed of late here at 445 E. Ninth St. at Avenue A. The upscale barber shop opened in early 2018.

Three of the four new businesses that opened in Icon Realty's renovated retail spaces along 441-445 E. Ninth St. (aka 145 Avenue A) have now closed in recent months.

BeetleBug, the floral design shop, quietly shut down last month. They opened in early 2017, and were the first tenant to arrive after Icon bought the building for $10.1 million in April 2014.

Poke N' Roll is the lone business now on the Ninth Street side of the building.

One pre-Icon retail tenant here in 2015 said that the new landlord either wasn't renewing leases or offering terms with unmanageable rent increases.
Posted by Grieve at 5:50 AM

Oh man, the turn over is really hitting hard this year. These guys were always so sweet, and would put out treats and water for tired pooches leaving the park.

Well, Icon is awful. They seem to do everything to make their tennants - residential and business - miserable. Ridiculously high rent, continual renovations, etc. Their building on 2nd Ave between 3&4 has had scaffolding for over 3 years...what an impediment for the resident restaurants' business. Icon just doesn't seem to care.

Icon "renovated" these buildings and now it is a real shit show. Regulated Tenants continue to be harassed and thrown out. Retail tenant have been dealing with terrible and disgusting conditions which are result of cheap renovations.

All these businesses made the same error. They rented from a criminal outfit like Icon Realty. What did they expect? Now they are closed and probably all involved in lawsuits.

I do agree with the previous post regarding the Barber Shop. The East Village is pretty saturated. Icon put the owner of Beetle Bug through Hell which was painful to watch. They are soulless.

The owner was a finance guy who knew nothing about the barber business and wasn't even a barber and cared more about having the liquor license and parties and VIPs then really caring about the quality of the people that work there. I interviewed with the owner for a barber position and was told that I had to see three other people that helped him run the place to see if I would be hired. For a place that small with five chairs you need three people plus you to run the place. I knew when I had the interview with him that he was a jerk. Karma always has its way