Auriga Cafe announces itself on Avenue A 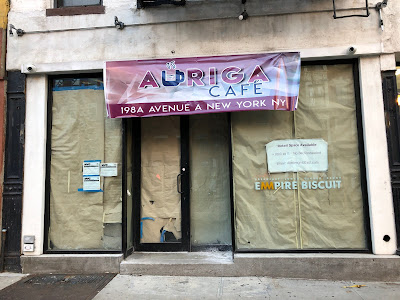 It has almost been a year to the date when we first heard that a diner was coming to 198 Avenue A between 12th Street and 13th Street.

Back on Friday, the signage arrived for Auriga Cafe. The cafe comes courtesy of David Duran, who runs El Camion a storefront away on the corner at 12th Street.

Through the grapevine, we've heard that this has been slow going here for a variety of reasons, such as waiting for city permits and approvals as well as undoing the mess that the previous tenant, Empire Biscuit, left behind.

The storefront hasn't been in use since the Biscuiteers started peelin' potatoes in January 2016.

I was thinking how much I and my neighbors resented Empire Biscuit for catering to "drunks" and even having the word "drunk" in their logo on the window, and as luck would have it, I was walking by the space today just as a worker was scraping that word off the glass. It's a good sign! I wish them luck with this new venture. If it is anything like El Camion, the food will be good, and they will be good neighbors.