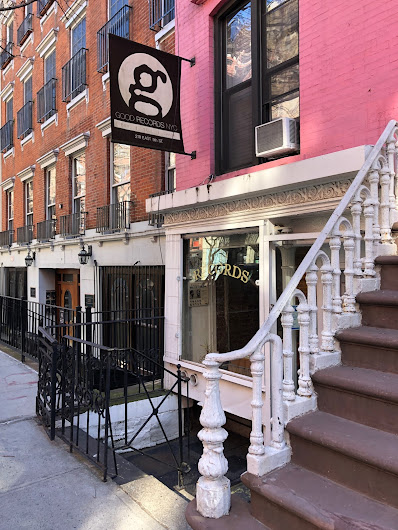 Good Records NYC bows out today after 14 years in the East Village.

However, as previously reported, the storefront here on Fifth Street between Second Avenue and Cooper Square will remain a like-minded shop specializing in used and vintage vinyl.

On April 1, Stranded Records, a San Francisco-based store that runs the Superior Viaduct label, is expected to take over the space at 218 E. Fifth St.

In an Instagram post on March 9, Good Records owner Jonny Sklute noted that "lots of things will remain the same," including most of the staff — and inventory.

Gothamist had more earlier this month:

It's not as though business wasn't good — Sklute told Gothamist that the store had their best sales year ever in 2017. "It was just time," he told us over the phone. Originally from the west coast, he moved back there with his family two years ago after over two decades in NYC. He said he was "burnt" from 14 years of keeping the shop open, also noting high rents in the area. "Eventually it just became way too costly and way too difficult to try and run a small little shop," he said.

Sklute said that the folks at Stranded Records were looking to expand to NYC, so this scenario worked out for everyone involved.

The posted hours today are from noon to 7 p.m.

Previously on Ev Grieve:
Good Records NYC is closing, though the shop will continue to sell vinyl as Stranded Records
Posted by Grieve at 10:00 AM