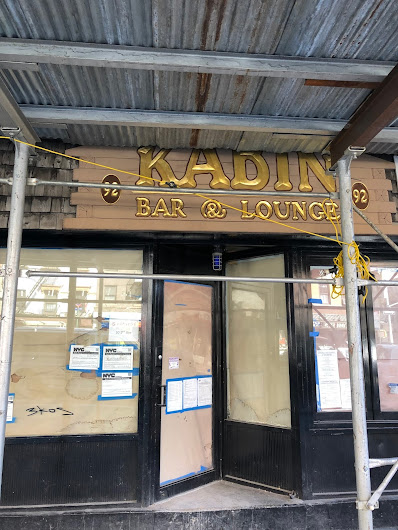 Renovations continue over at 92 Second Ave. between Fifth Street and Sixth Street ... where a small sign on the exterior reveals the new tenant — Sanpoutei Ramen... 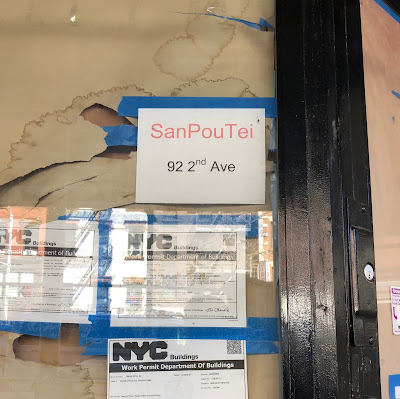 Last fall, CB3 OK'd a beer-wine license (they were originally seeking full liquor) for the Sanpou Group, which operates 30 restaurants worldwide, including Sanpoutei Ramen, which started in Niigata, Japan, in 1967.

Reviews of the restaurant note that "Sanpoutei is defined by its authentic Niigata-style ramen, a shoyu-ramen in a clear fish stock-based broth."

Sanpoutei joins a crowded ramen market in the East Village... other recent arrivals include Tatsu Ramen on First Avenue ... and TabeTomo on Avenue A.

Kabin Bar & Lounge closed in March 2015 at this address. While there were a few potential suitors, the storefront has sat empty for four years.
Posted by Grieve at 4:15 AM

Western palates will probably scoff at me but this looks promising. I know we are at or near Peak Ramen but an authentic fish-based broth sounds like a refreshing change from every other ramen place around here, which serves pork broth. And those pork broth places seem to be battling each other for most fattiest broth. Talking about Tabetomo on A. You can stand a spoon up in their broth. Or that now closed place Zundoya on 10th, where you could actually specify how gross and fatty you wanted your soup. I like pork and everything but like anything else porky goodness has a limit. More pork fat doesn't always equal more goodness.

Slurping is the new snot rocket.