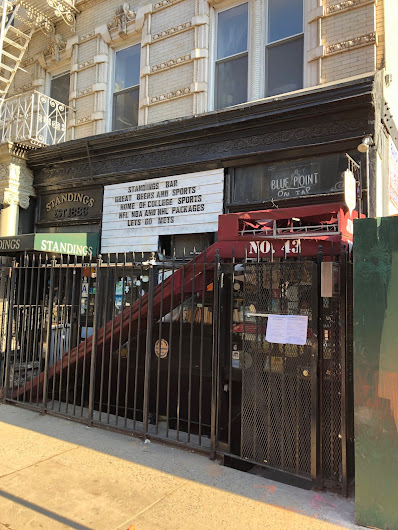 [The currently closed Jimmy's No. 43]

Here are a few of the applicants on CB3's SLA committee docket tonight for new liquor licenses (find the full agenda at this link) ...

We've mentioned this one before. Jimmy Carbone is collaborating with Graham Winton of Paloma Rocket for a new venture in the currently-closed Jimmy's No. 43 on Seventh Street.

As Carbone told us last year: "Operation-wise, it will pretty much be the same — the same Jimmy's vibe." The menu will feature Carbone's pizza.

Carbone is currently recovering from a series of spinal surgeries after discovery of a previously undiagnosed staph infection that spread to his spine. Read more about his recovery here. 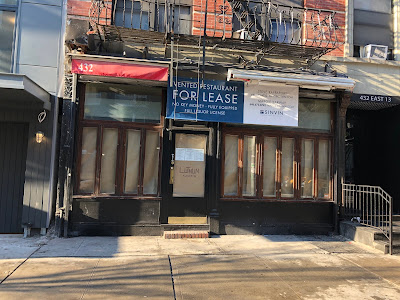 For more, let's head over to a preview that Jennifer Gould Keil had at the Post last month:

Named for Ahmed’s mother — the name means “something new and unexpected” in Bengali — the 800-square-foot restaurant will have 30 seats in the former Teshigotoya space ...

The global menu is influenced by the countries and top eateries where the chefs have worked — from Lespinasse and Café Gray to El Bulli, The French Laundry and The Fat Duck.

The plan is to offer two tasting menus, one of which would be vegetarian, both seasonally driven and well-priced along with a small and “world-focused” wine list, the chefs say.


You can find the questionnaire with more details at the CB3 website. Here. 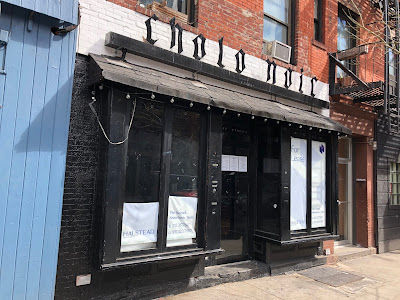 The applicants for this space at 503 E. Sixth St. between Avenue A and Avenue B were on the January docket, but scratched.

The premise has changed a bit from what we saw in January. The proposal now calls for an all-day establishment called Outpost Brewhouse.

There's a mission statement of sorts on the questionnaire that notes: "As longtime locals, the management and owners want to create a space for young families, longtime residents and neighbors to enjoy some elements the community has been lacking over the years. We aim to implement a brighter space to a dark street and to contradict all of the dark 'corner bars' on the street and neighborhood."

They go to describe Outpost Brewhouse as "a destination for young families and professionals that enjoy some of the refined points in life in coffee, food, beer and cocktails."

The applicants have operated a handful of bars, including the Trading Post on John Street in the Financial District and the Globe on 23rd Street. Closer to home, the applicants also own Solas, a mainstay on the SantaCon circuit, on Ninth Street between Second Avenue and Third Avenue.

Cholo Noir, the Chicano-inspired bar-restaurant, was the last tenant here. 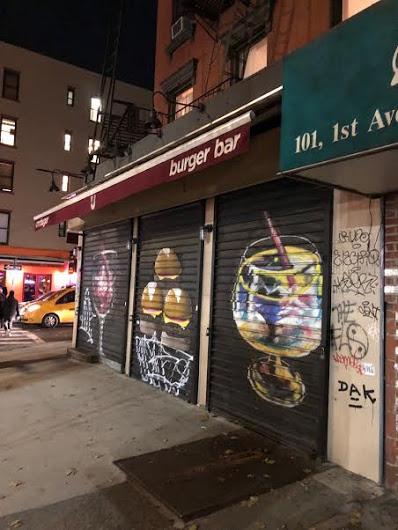 An applicant whose previous listed experience was as a bartender at Michael Jordan's The Steak House N.Y.C. is looking to open an establishment with a six-table sidewalk cafe called the Headless Widow. (Not sure of the origins for the name — an unpublished Washington Irving short story perhaps?)

The sample menu on file with the questionnaire shows a variety of pub-fare offerings — burgers, salads, sandwiches and main courses like the Headless Widow Fish and Chips. The proposed hours are 4 p.m. to 1 a.m., with a 2 a.m. close Thursday through Saturday.

The corner space on First Avenue at Sixth Street was previously Umm Burger for 13 months.

The CB3 committee meeting is tonight at 6:30. Location: the Public Hotel, 17th Floor, Sophia Room, 215 Chrystie St. between Houston and Stanton.
Posted by Grieve at 4:25 AM

Outpost brewhouse seems douchey as fuck. Nobody wants that on the residential block. What an ass statement about other bars that precede them for decades.