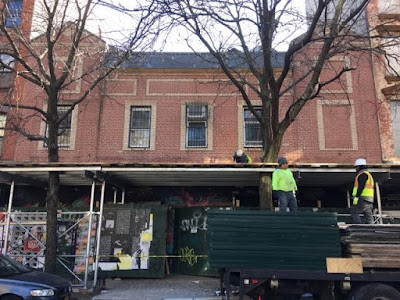 EVG reader Bobby G. shares these photos from Tuesday, when workers started erecting the scaffolding to envelope 238 E. Third St. ahead of the building's demolition... 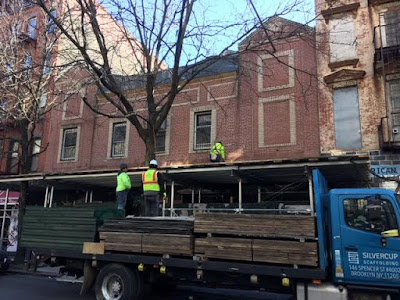 As previously reported, a 7-floor, 20-unit residential building is slated for this property between Avenue B and Avenue C. (New-building permits are still pending with the city.)

The current building, which the Blue Man Group owned at one point for use as a practice facility, also served as a movie theater. Public records from July 2017 list two of the founders of the Blue Man Group — Chris Wink and Philip Stanton — as the previous owners, who received $18.6 million for this and another LES property.

Vinbaytel Property Development is the new owner of No. 238. Vinbaytel has developed several East Village condos in recent years, including at 227 E. Seventh St., 67 Avenue C and 26 Avenue B.

A visit to Rossy's Bakery & Café on 3rd Street
Posted by Grieve at 4:03 AM

I loved this little building with it's symmetrical restrained classical facade. Goodbye anything human scale and with soul.

Can;t wait for that inevitable earthquake and the city of shattered glass