Y Cafe has closed on Avenue B 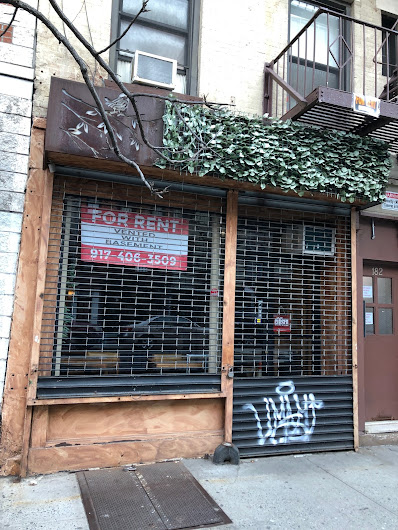 Y Cafe, the low-key, health-focused restaurant at 182 Avenue B between 11th Street and 12th Street, has closed.

According to a reader, the lease was up on the small space, and the owners decided not to renew. (Whether this was due to a rent increase is not known at the moment.)

As EVG reader Etienne noted: "I really enjoyed their Thai-fusion food, friendliness and prices. It sort of saved me when Life Cafe closed."

Y Cafe opened here in April 2011... they were originally Wai? Cafe on First Avenue between 12th Street and 13th Street.
Posted by Grieve at 4:30 AM

Sad for it was a nice EV joint. Another one bites the dusk.

Noooo!!! My go to for a healthier delivery option. Loved their carrot ginger dressing.

Sad news -- one of the few health-conscious restaurants in the EV that aren't "plant-based", "gluten free", "vegan everything". It was just healthy food, cooked simply. They'll be missed.

this was my favorite restaurant in the area. so sad!!!
they were the nicest people and the food was amazing

A nice place to sit on a sunny day and have a nice meal while watching the world go by. Sorry to see it go.

One of my absolute fav family eateries! Truly heartbroken. My kids love this place. Been eating there since they were located on 1st ave before ave B. Man, this sucks! 😞

Gonna miss their odd salmon patties. Where else can you get stuff like that. Is my question to you.

Googled them and this post came up. They had one of the best sesame chicken dishes I’ve ever had. It was cheap too and came in a great TV dinner tray with brown rice, steamed vegetables and a salad with this vinaigrette which was amazing. One of the many delivery staples I’ll miss from dearly departed restaurants.