'Wealthy, anonymous individual' buys Boys' Club building; will remain in use for a nonprofit 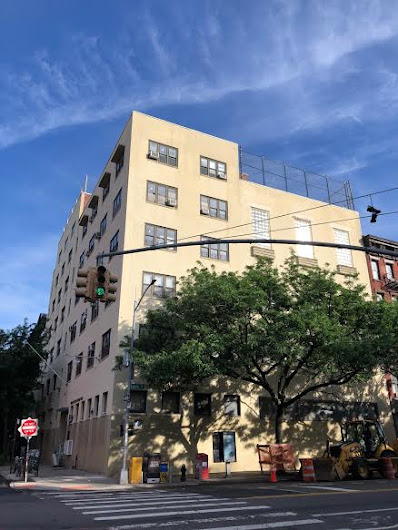 As we reported last week, multiple sources told us that the Boys' Club have sold their Harriman Clubhouse to a "nonprofit arts organization and will be a theater and house various arts-related entities." In addition, the Boys' Club would rent part of the space for one more year while searching for a new space in the area.

However, a Boys' Club rep told us that building has not been sold, and "the process is continuing."

And one week later: Crain's reports that the building on Avenue A and 10th Street was sold for $32 million to "a wealthy, anonymous individual."

Paul Wolf, a real estate broker and adviser who specializes in working with nonprofits and who represented the foundation, said the buyer wanted to remain anonymous. Wolf said the buyer was planning to sell the property, potentially at a substantial loss, to a nonprofit that would maintain its civic use.

"The goal is to keep this as a community facility," said Wolf, who is co-president of the firm Denham Wolf. "The intent is to sell it to a nonprofit at a lower price than the purchase price."

"This is a remarkable turn of events," said state Sen. Brad Hoylman, who last year was one among several elected officials to criticize the club's decision to sell. "Certainly this is a very valuable property in a highly desirable neighborhood right next to a park. But instead of a private developer that wants to build condos, we're getting a foundation that wants to invest in the local community."

Executive Director Stephen Tosh said the Boys' Club will remain at 287 E. 10th St. for the next year while it searches for new space.

As I first reported in June 2018, Tosh told alumni about the BCNY's plan to sell its Harriman Clubhouse, which opened in 1901. The BCNY would continue to use the space through June 2019. A listing for the 7-story building arrived on the Cushman & Wakefield website last October with a $32 million asking price.

RUMOR: The Boys' Club building on 10th and A has a new owner; will remain in use as a nonprofit
Posted by Grieve at 2:30 PM

Great news! Something to update my walking tours with.

Great. Thanks you Whoeveryouare! The EV loves you.

The sad part of the news is that Brad Hoylman was surprised. It just shows how far out of the loop our local pols are when it comes to major issues in the community. I bet Brewer and Ruin-The-EV Rivera were just as surprised. I hope when the community fights off the real estate barbarians over East River Park that they are on the right side of the issue. Same goes for TSP repaving. WAKE UP BREWER! WAKE UP ReZone Rivera you can't talk gender id, #MeToo, immigration and ignore local issues that mean the world to the EV. It's our world. If you can't help... we can get somebody else.

Wonderful. Finally something to celebrate in today's cruel and uncertain world. Kids need a place like this to grow, develop and just be. If I was a philanthropist, I would also pay it forward as an anonymous donor and step back from the press and attention. At the end of the day, this is about the kids and their place of refuge in a big, crazy busy city.

i would much rather read that the beneficiary of the generosity of the anonymous buyer is the boys club - that they would remain in place and that a much needed long-time neighborhood non-profit reource could continue their local programs. all the buying, trading places, selling, moving, puts everyone out of business for an extended time, will be very expensive even if it is temporary.
the buyer would still get his tax write off and the boys club could maintain their programs with no disruption for anyone. the moving around would be on paper and everyone would benefit.
based on current rezoning, real estate deals, luxury development, air rights, gifts to developers, etc. i do not trust this complicated and secret process that appears to have started with nobody knowing what is happening.
this does not sound like something to be thankful for.

AGree with you Blue glass...SOunds like another High-End Arts club coming soon...

What great news! It's fantastic that the buyer is doing this... it's downright saintly that they're doing it anonymously. This is a huge relief, the thought of someone turning this into more condos was worrisome.

Just a second thought. Although I love the idea that the building was saved... there are problems finding an arts group that can afford the price of the building and the renovations it might need. But since it's obvious that the BCNY wants out, that turning the building back over to them is not an option... sad to say. We just have to hope that all will work out for the EV and the boys who have been abandoned by the power brokers of the city and our local pols. It's just business as usual... ONE PARTY RULE. ONE PARTY RULE.

Because an open book deal like B&G Club sells to Ben Shaoul, he plans condo's would be much more preferable? Disagree with BlueGrass.

cmarrtyy, Brad Hoylman wasn't surprised by this news, I'm not sure where you got that impression. He is very much in the loop regarding local community issues. He comes to local events frequently and was at a press conference organized by Cooper Square Committee in front of a Jared Kushner building last month talking about passing stronger rent laws, which the state legislature did in mid-June.

As for this Boys Club deal, about 20 local non-profits were contacted back in March, and invited to put together a proposal for the building, and a committee put together by the foundation picked the winning proposal.

"This is a remarkable turn of events," said state Sen. Brad Hoylman... Sounds a bit surprised to me. Especially since it was after the fact.

I'm in the arts... And while the arts are a better opportunity for the community than a lux building... it still doesn't answer the question that the BCNY abandoned the young men of the community. Arts programs are not a substitute.

Everyone I 've spoken to at the Boys Club ( Next door to TSB) was under the impression the the buyer would let them stay permanently. I don't get why that isn't happening.