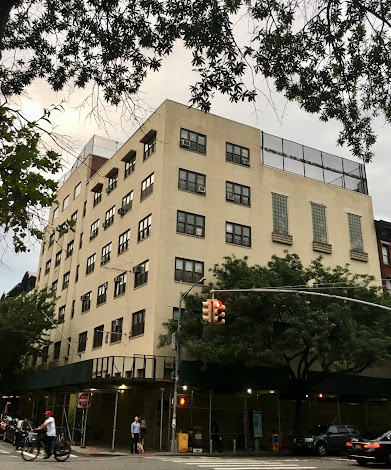 The Boys' Club of New York (BCNY) will be selling its Harriman Clubhouse building on the northwest corner of 10th Street and Avenue A, according to a recent letter to alumni from Stephen Tosh, BCNY's executive director and CEO.

An EVG reader, and an alum of the Boys' Club, shared a copy of the letter, which states that the building, which opened in 1901, will remain in operation through June 2019.

According to the letter, BCNY will look to rent space somewhere on the Lower East Side to continue with programming for Harriman members after the closure next summer. The letter also states that the sale of the East Village building will allow BCNY the opportunity to start new programs in other communities, including Brownsville, East New York and/or the South Bronx. 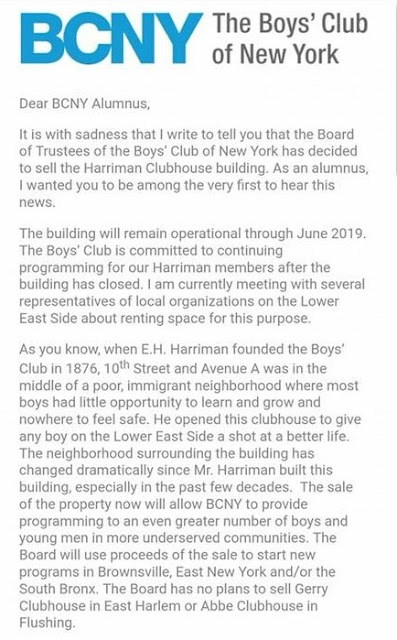 A few excerpts from the letter:

It is with sadness that I write to tell you that the Board of Trustees of the Boys' Club of New York has decided to sell the Harriman Clubhouse building...

The neighborhood surrounding the building has changed dramatically since Mr. Harriman built this building, especially in the past few decades. The sale of the property now will allow BCNY to provide programming to an even greater number of boys and young men in more underserved communities. The Board will use proceeds of the sale to start new programs in Brownsville, East New York and/or the South Bronx. The Board has no plans to sell Gerry Clubhouse in East Harlem or Abbe Clubhouse in Flushing.

In 2012, Steiner bought the former Mary Help of Christians property on Avenue A between 11th Street and 12th Street from the Archdiocese of New York for $41 million. The church and school were torn down.

No word yet what the BCNY building might fetch on the market... or what might happen to the 7-story building — complete gut renovation or full demolition to make way for a new residential complex. 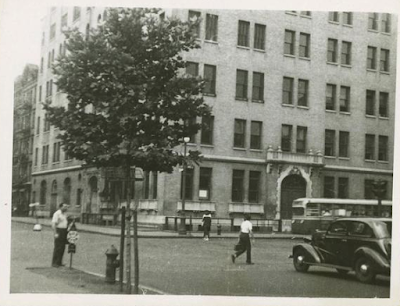 Today, the building is equipped with two gymnasiums, a swimming pool on the seventh floor and a rooftop space where a slew of athletic, music and art programs are offered to roughly 300 members, boys ages 7-to-21. Club officials have not begun talks with specific buyers yet, but aim to sell the space to a group with the community's needs in mind rather than a developer who would raze the structure.

"That building is built like a bomb shelter — thick walls of concrete and steel — if it were to be knocked down it would be hugely expensive," said Maggin. "It's a seven-story building with unique features, we're hoping that it could become something for the area."

It is interesting that all the nonprofits have closed and moved out, replaced my high-end lux housing, without any compensatory services for the neighborhood.

Except for those who trudge down here on a weekend night to get blasted on all those crazy happy hours, it has become a painful nightmare for everyone else.

I'm sure someone will get a new 2nd home on Martha Vineyard thanks to this transaction.

Yeah, because God knows that all the kids in the numerous projects a mere 3 blocks away have stable home lives, both parents, no peer pressure, fine schooling, lots of after-school activities, and all the other things that will make them well-rounded citizens. Money had NOTHING to do with this decision, I'm sure. And who isn't excited about the prospect of yet another major construction debacle on Avenue A, where as soon as one finishes, another crops up?!?

Are we now at a point in our culture where we play poor against poor without even batting an eye. The BClub is packed, packed with kids and young adults taking classes and learning life lessons. But the money from a building with a park view is too much to turn down. WHERE ARE OUR POLITICIANS?! Not a word. Not a word.

Well, this is sad and yet another loss of basic services to the neighborhood. My son went here for afterschool programs and summer camp. How many services can a neighborhood lose before it becomes just an area like any other...?

transnationalist traitor-doesn't take long to track back these parasites destroying our neighborhood. Anyway, the projects will be taken down within 10 years or so, this is an advance move.

Edward J. Rappa, Chairman
Mr. Rappa served as a Senior Managing Director of Bear Stearns & Co. from 1979 to 1989. He serves as a Director of Brightwood Capital Advisors, LLC

Wow this is bad. That place is constantly packed with happy kids, it is needed here. Good luck renting a facility in the LES that has the room this place has. My guess in a year they will announce they are moving from Manhattan to the far reaches of Queens.

Hey let's sell our building to fund our programs other neighborhoods/part of the city, to hell with the kids where we started.

Time for what I call a "non-profit building sale tax" which is simply 20% of the sale of the building.

You sell this building for 40M, you give the East Village 8M of that. Spare me you're making "only" 32M when this building was bought for a song in 18whenever and this corporation has been tax-exempt or paying far less taxes than what for-profit businesses pay. You reaped the benefits and want to take the money and run, you leave something behind i.e. money cuz money talks bullshit walks and that statement is bullshit walking out of the EV.

Churches should be taxed 33% (33 for the age Jesus Christ was wrongfully executed.)

No tax record or deed on the property, hhmm http://maps.nyc.gov/taxmap/map.htm?searchType=BblSearch&featureTypeName=EVERY_BBL&featureName=1004380032

In John Lahr's "Notes on a Cowardly Lion" a biography of his father Bert, he talks about Bert's troubled youth. How he learned to box at the Boys Club on Avenue A. And ended up good enough to fight a well known club boxer Downtown Brown. But to show you the lasting effect of the BClub's programs, in his first Broadway show he played a boxer in "Hold Everything". And we all remember his iconic role of the Cowardly Lion when he strikes a boxing pose and lisps..." Put up your dukes". Now one possibility, one venue will no longer exist in our neighborhood for our youth to find a way to channel their energy into a life exceptional.

The sale of the building just reeks of the worst of our times - discriminating against those wth the least by those who have it all... and want even more.

When you consider that the community's "needs" are now a boozy brunch and a place to drink "frosé all day," it doesn't take me long to imagine what "use" the two swimming pools will be put to. [Hint: the riff-raff of the neighborhood won't be invited.]

On that note, the swimming pool in the basement of the Christodora still lies [presumably] dry and dormant because of a "community-use" provision in the deed that stated the pool must remain a community facility.

After having a very bad childhood experience with water at the beach one summer and having almost drowned, I avoided the water and swimming for many years, until one summer all of my friends started going to the Boys Club. We would play games in the pool like Cut the Corners, a form of water tag, and I gradually grew more comfortable with going in the water. Someone started throwing coins and small objects in the pool and challenged us to dive for them, and suddenly I learned how to swim underwater, even at the bottom of the pool in the deep end which was 12 to 16 feet deep. We even learned to swim with snorkels and I overcame all of my fear of the water. It was one of the happiest times of my life. The Boys Club is an essential place for kids growing up in the city, which no condo or residential building can ever replace.

Yes, it's a very sad economic and social commentary on our times that the Harriman Building on Avenue A and 10th Street is worth so much money that it makes no sense for the Boys' Club to keep it. They, like every other non-profit in this country, are struggling to keep providing the services they provide. If the sale of this building will allow them not only to keep providing services in the East Village like they intend to, but to expand their reach to other communities that desperately need their help, I say amen. How many of you who are complaining have donated to the Boys' Club to help them keep their programs running? Also, FYI, I happen to know that at least one of the board members that were outed by someone above is an Alumni of the Harriman Club. He serves because he wants to give back both in terms of time and money. The person who said they bet someone is getting a new house in Martha's Vineyard as a result of this transaction is an idiot and doesn't know what they're talking about. I don't know the board member personally, but I know people who work at the Boys Club, people who grew up in the East Village who are Alumni, and I am a supporter. Did you know that if you use smile.amazon.com to make your purchases and specify the BCNY, a portion of your purchases gets donated to the Boys Club of NY? I've been doing that for years. People, put your money where your mouth is.