Cheers Cut has not been open lately on St. Mark's Place 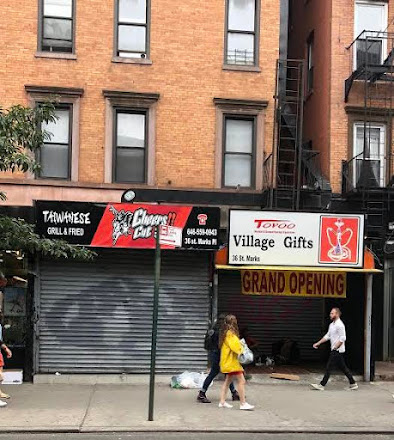 Cheers Cut, the "Taiwanese-inspired" fast-food mini-chain at 36 St. Mark's Place, has not been open lately during announced business hours. ... and the phone to the quick-serve restaurant is no longer in service.

Cheers Cut just opened last fall here between Second Avenue and Third Avenue. They quickly made a name for themselves selling large fried slabs of chicken and squid. The place did have a temporary feel to it, with a entrance still marked by the previous business — Village Gifts ... as well as a "Grand Opening" banner nine months after actually opening. 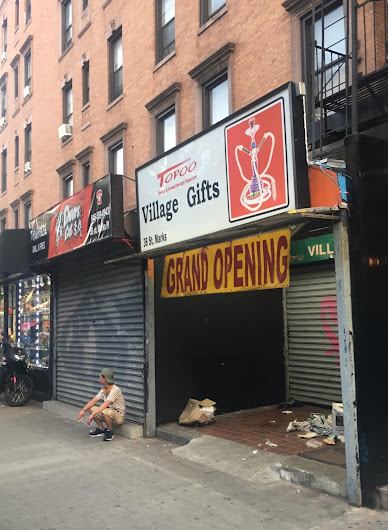 In any event, this may just be an unannounced temporary closure. (The Cheers Cut Facebook account is still on robo mood and posting to tempt people to stop by.)

Still, the address has been a bit of a doomed location on this block. There was Friterie Belgian Fries, which closed in January 2017 after nearly 18 months in operation.

The previous tenant, Fasta ("Pasta Your Way"), lasted less than six weeks in business. Before that, it was the $1.50 branch of 2 Bros. Pizza, which closed in February 2015.
Posted by Grieve at 4:11 AM

Ate there once. Was meh. I'm happy that we will get to roll the dice again with whatever replaces it.

How about a Vietnamese place for once? And I don't mean another limited menu Pho spot, something like the spots on Baxter Street in Chinatown like Nha Trang One, or a mini Saigon Market. Anything with lemongrass will do.

Agree with Giovanni, Hanoi House and Madame Vo are V-N for trendsetters and Instagrammers, how great would it be to have an NT One, Bo Ky or Pho Bang - bare bones, solid food, decent prices - in the EV?

Sao Mai on First Ave is tasty Vietnamese for a decent price! You gotta try it Gojira.

Anon. 1:19 - Thanks, Sao Mai is my go-to place when I'm too lazy to trudge down to Chinatown - love the food and the folks, but every now and then I want Baxter Street grunge, ya know?!?

Sao Mai is pretty good, they make a good Ca phe sua da, but their lemongrass dish is a bit sweet for me. I wonder if they can make it less sweet to order? I just found a good lemongrass dish at Bangkok 2 Thai, which is further north on 1st Ave at 20th St. and is very similar to the Vietnamese dishes on Baxter Street. Il’ll take a Bo Ky or a Pho Bang style place too, but my favorite Vietnamese restaurant name was a spot in the West Village called Pho Sure.