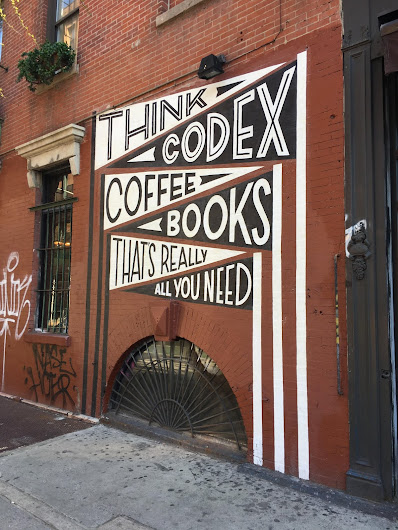 The New York Times Style Magazine on Sunday took notice of the recent art bookstore additions in the neighborhood ... a piece titled "The New York Neighborhood Where the Art Bookstore Is Alive and Well" takes a look at Codex on Bleecker at the Bowery ... Karma on Third Street ... the relocated Mast on Avenue A ... and the incoming Printed Matter at the Swiss Institute on Second Avenue and St. Mark's Place.

The alternative art scene found a home in the East Village in the early 1980s. Artist-run collectives and unconventional exhibition spaces started to fill the empty storefronts; before long, however, the slept-on real estate became bank branches and chain coffee shops. But, as of late, the East Village has been reclaiming its reputation as a cultural haven with a series of new independent art bookstores.

This is the link.

And there is one baffling passage in the article ... in the section about Mast (h/t Dave on 7th)...

In 2010 [Brian Leitgeb] and his wife, James McKee, opened Mast Books in Alphabet City, built around a few large and extraordinary personal book collections he had purchased. And last week, Mast moved to a larger location just down the block, marking its official entrée into the East Village.