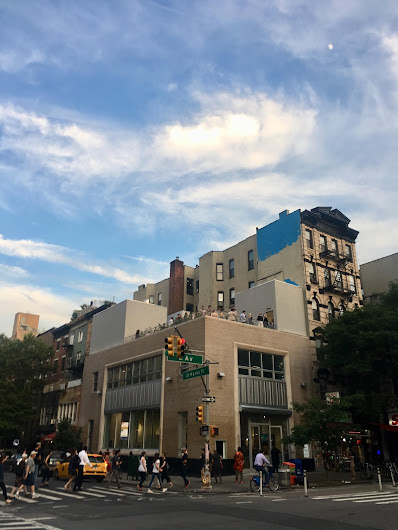 On view will be "Readymades Belong to Everyone" ... the third edition of SI’s Architecture and Design Series. Curated by Fredi Fischli and Niels Olsen, the exhibition features more than 50 artists, architects and collectives from 16 countries with 17 new commissions.

The opening hours are noon to 8 p.m.

The building — 7,500 square feet in total — was a former Chase branch. The four levels include space for exhibitions, a research library, a bookstore run by Printed Matter and a rooftop terrace with art.

Michael Wang installing his work, Extinct in the Wild, on the roof of 38 St Marks Pl. #SIONSITE #swissinstitute

Here's more background via a recent preview in The Wall Street Journal...

The nonprofit institution was created in 1986 by a group of Swiss expats looking to highlight their country’s artists and culture. That mission has since broadened to promote a diverse community of international artists, all the while charming the wider art world with its zeitgeist-tapping exhibitions.

Despite this success, Swiss Institute director Simon Castets yearned to find a permanent home base. After reviewing roughly 100 buildings and raising nearly $4 million, the French-born Castets and his board, chaired by philanthropist Maja Hoffmann, landed on a former Chase bank ...

“We used to be near Céline and Moschino,” says Castets, 34, of the Institute’s former Wooster Street space. “[We’re now] on one of the city’s most heavily trafficked corners. It changes the profile entirely.”

Previously on EV Grieve:
Chase branch on 2nd Avenue at St. Mark's Place has the potential to get 4x larger with new owner

A few more details on the Swiss Institute's move to the East Village
Posted by Grieve at 4:29 AM

Came upon this by accident and slipped in 10 minutes before closing. How lucky are we? Art exhibits, library and roof garden - all free! A wonderful addition to the neighborhood!