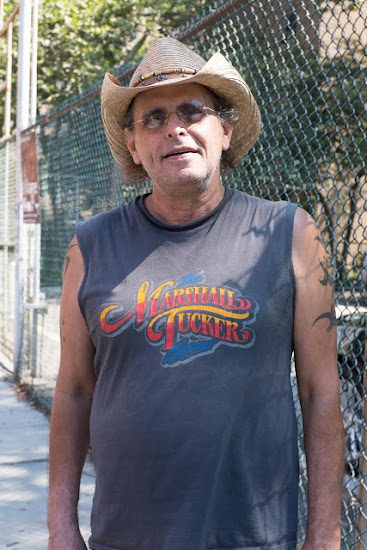 George Cameron, a longtime East Village resident and member of the baroque pop band the Left Banke, died on Sunday. He was 70.

In 1966, the Left Banke scored a top-5 hit with “Walk Away Renée.” Cameron, a drummer, continued to stay active with Left Banke and other music projects through the years.

We featured Cameron in an Out and About in the East Village post from August 2015.

Cameron, who was born in the city, talked about his childhood with James Maher:

I’m originally from Manhattan, but I’ve been around the world and stuff. I grew up in Hell’s Kitchen. That’s why I’m such a bad kid. It was OK and then I was raised in Brooklyn because we bought a house out there.

I lived on the Upper West Side, but moved down here seven years ago. The Upper West Side was getting a little you know… not that loose, so I said let me try something else. So I came down here, man. I love it down here. I like the diversity. I love the small parks. All the people are really nice. You say hello, they say hello back.

He also talked about his start in music:

Me and mom had an up-and-down relationship. I guess you could call it like that, so I left kind of early, at 16 and I got involved in singing in the Village. My friend and I hooked up and we just started singing in the streets like crazy. The music scene was basically the Village — the West Village and some of the East Village. Everybody was around. It was all about the music. Mostly everybody was into music it seemed like. People were a little tighter with each other.

Somebody came up to us on the street, ‘Do you want to [be in a band?]’ And we went up to the studio. We had a recording studio to ourselves, day and night. Nobody has that anymore. I can’t get used to that part. We were dedicated and we did good. We didn’t realize it, but we did pretty good.

We’d tour for months at a time. We’d be on the road. We played with The Beach Boys, Mitch Ryder and The Detroit Wheels, The Mamas & The Papas — all those people. It was fun. When you’re 17 years old and you’ve got all this money, you’re really not thinking about much. When you’re 17, you think about girls; that’s all you think about. It was really wild and we really didn’t have any person behind us who was sort of an authority figure. Everybody around us was like, ‘Oh, we saw these young guys. They really just want to play. We can take their money now.’ And they’re still trying to do it today.

This link has details on his calling hours tomorrow and graveside service on Friday.
Posted by Grieve at 4:30 AM

Damn. I have the first Left Banke LP, and Walk Away Renee is one of my favorite songs from the 60s. Haven't listened in a while, guess it's time to drag out the album and fire up the turntable. RIP, sir, I used to see you around but had no idea who you were or I would have stopped you and thanked you for the gorgeous music.

RIP, sir, thank you for the beautiful music.

I did run into George on 6th street a few years ago, after the Out and About post, so I knew who he was. Glad I said something.


I knew George when I was 16, we had a crush on each other way back when. I only just found out of his passing. May he rest in peace.