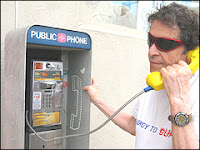 Paul Krassner, who "epitomized a strain of anarchic 1960s activism," per the Times, died yesterday at his home in Desert Hot Springs, Calif. A cause of death was not revealed by his family. He was 87.

The Brooklyn native, the founder The Realist, one of the earliest underground humor magazines, had deep roots in the East Village.

From his obituary in the Times today:

Encouraged by [Lenny] Bruce, Mr. Krassner often took to the stage, delivering comic monologues at nightclubs like the Village Gate. He and his East Village friends also dreamed up pieces of public tomfoolery.

In one, in 1968, a group of 60 hippies chose to turn the tables on tourists streaming into the East Village to gape at its scruffy, longhaired denizens. With cameras dangling from their necks, the hippies hired a Greyhound bus for a sightseeing tour of the tidy middle-class neighborhoods of Queens.

And from the Associated Press:

An advocate of unmitigated free speech, recreational drug use and personal pornography, Krassner’s books included such titles as “Pot Stories For The Soul” and “Psychedelic Trips for the Mind,” and he claimed to have taken LSD with numerous celebrities, including comedian Groucho Marx, LSD guru Timothy Leary and author Ken Kesey.

Check out a few highlights from his long, active life over at Boing Boing.

Previously on EV Grieve:
Last day for the Yippies at No. 9 — for now
Posted by Grieve at 8:00 PM

Personally, I would love for someone to interview WBAI's Bob Fass on Krasner.

I remember learning about his JFK essay in college, and thinking it was about the wildest thing I had ever heard of in my life. RIP