Report: One of the red-tailed hawk chicks dies 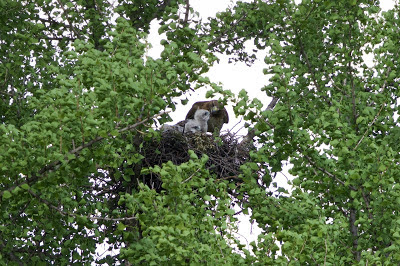 Sad news from Tompkins Square Park. Goggla is reporting that one of Christo and Amelia's two chicks has died.

A cause of death is not known at this time.

This marks the third consecutive year that a red-tailed hawk offspring has been lost.

We lost a fledgling last year to a combination of rodenticide and West Nile virus. The year before that, another fledgling died and tested positive for West Nile. It's not possible at this time to say what killed this chick, but the same dangers still exist in our environment. The Parks Department does not use rodenticide in Tompkins Square, but it is used all over the neighborhood on private property and in some community gardens. West Nile virus is spread by mosquitoes, so any standing water is a breeding ground for them.

This year's chicks hatched around April 20.

Previously on EV Grieve:
1 of the 2 red-tailed hawk fledglings in Tompkins Square Park dies from secondary poisoning
Posted by Grieve at 7:00 AM