Looking at the new Avenue A L-train entrances; plus L repairs are reportedly ahead of schedule 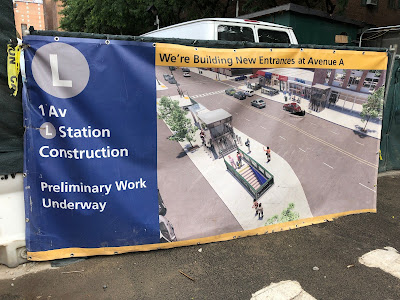 Concerns over a long-term L-pocalypse may have been unfounded, a new published report says.

The Daily News reports that the Canarsie Tunnel rehabilitation is actually a month ahead of schedule — and the whole project may be finished by April 2020.

All the major demolition work on the East River tunnel should be done by the end of this month, said Wayne Faulkner of JMT, the Metropolitan Transportation Authority’s consultant on the project. That part of the job includes removing 6,800 feet of crumbling concrete duct bank that houses long-abandoned Con Ed power lines on each side of the tunnel’s tubes.

The broken-up concrete was taken to the MTA’s Linden Yard in Brownsville, Brooklyn via work trains, said the MTA’s head of capital construction, Janno Lieber.

“One of the advantages of the approach that was taken when the project adjusted means and methods was you didn’t have to take all that huge amount of debris out through the Avenue A exit [in the East Village],” Lieber said.

Work was expected to take roughly 15 to 18 months.

In late April, the MTA started its service reduction to repair the Sandy-damaged tubes between Manhattan and Brooklyn, ramping down L times to 20-minute waits starting at 8 p.m. to 5 a.m. during the week and around the clock on weekends.

The slowdown came about back on Jan. 3 when Gov. Cuomo made that surprise announcement that the L-train wouldn't be completely shut down as previously planned.

Meanwhile, seems like a good time to check in on the progress of the new L-train entrances — with elevators — that are coming to Avenue A and 14th Street... 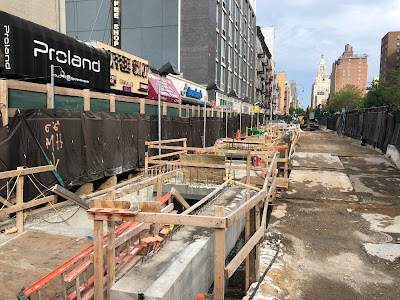 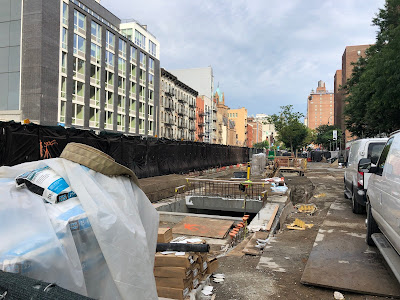 The MTA shared this photo back in April showing an Avenue A entrance from below... 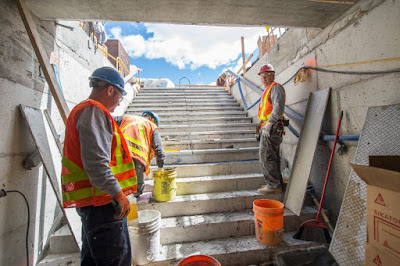 The work on a new entrance a block away from the First Avenue station started in July 2017 to help relieve congestion at the stop.

In late May, Town & Village reported that a Stuy Town resident first made a request for an Avenue A stop — in 1947!

A Stuy Town resident who moved into the complex when it opened in 1947 wrote a letter to the Brooklyn Manhattan Transit Corporation, which operated the L at the time, asking if the transit agency would expand the First Avenue station by building an entrance at Avenue A. Resident Reginald Gilbert of 625 East 14th Street argued that pressure on the station from the influx of new residents made the new entrance a necessity.

Not sure what will be open first — the new entrances or the Trader Joe's right there at 432 E. 14th St.

Previously on EV Grieve:
To L and back: Reactions and questions over Gov. Cuomo's surprise subway announcement

Report: MTA commits to a shorter work day for the 14th Street L-train rehab
Posted by Grieve at 4:30 AM

Ok I doubt the MTA considered this but it would be great if they had built a tunnel connecting the eastbound and westbound trains as some stations have, however I am really pleased with having the Ave A entrances.

Finally, Reginald gets his wish! I hope he's still alive and gets to use the giant scissors at the ribbon cutting ceremony.

Having an entrance at Ave A is a game changer. This will be extraordinary once it is complete.

Are we keeping our collective fingers crossed? Are we waiting for the other (brake) shoe to drop? Ripley's should get a load of the MTA. A project on time... Believe it or not... Wow!!!!!!!

The substation at Ave. B has now been under construction for 2 years with no end in sight!

Originally planned because of the "impending" L-train shutdown, now it looks like there's even less of a need for the 14th st busway and the outsized 12th + 13th st bike lanes. Oh, but excuse me, my opinion is politically incorrect.

And I wonder how long after completion it will be before the MTA will discover some evidence of defective parts, defective workmanship, and/or other issue(s) that will demonstrate which corners got cut as they "fast-track" this huge project.

To the above commenters, the L train exit entrance is a nightmare at the eastbound side, there is little to no way for those with mobility limits to use this station. The second entrance will also be great for growing population living east of Ave A.

The special bus lanes are most likely temporary but the city will take this opportunity to rethink the constant snail pace traffic on 14th Street. Something has to be done since there are so many more cars and trucks on our streets than even 5 years ago.

The bike lanes on 12th and 13th Street are permanent so you can not look forward to parking your private property on the public land ever again.

I pay my taxes Noble, why can't I park my car on the street while following the parking rules, registering it and having it inspected? Want to charge for a yearly parking sticker? Fine. But there's not need to remove all of them just because you have an anti-car agenda.

@Noble: About your aggressive anti-automobile attitude, feel free to give it a rest. You harp on it constantly. People are as entitled to own & park their cars as they are to do anything else that's legal.

I have as much right to park my sofa where you park your car for free. Of course I would have to move it twice a week for street cleaning. The streets are not the domain of cars, the streets belong to all of us.

@neolani: Sure, I'd love to see your sofa parked on the street; just be sure you've paid for your sofa license AND your sofa registration!