Richard Morrison and Bill Rice at SHFAP begins on Wednesday 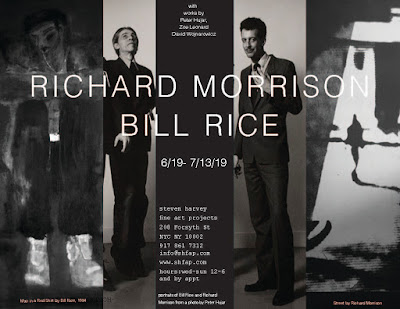 The two artists were close friends and collaborators for 25 years. This show includes major works from their estates and private collections.

It will also feature a video compendium of Bill Rice’s performances in underground film and theater compiled by Jacob Burckhardt as well as Morrison’s short film "Bust," featuring David Wojnarowicz that was included in the recent survey of photographs and films of Wojnarowicz at the KZ Museum in Berlin.

In the rear gallery there will be a selection of works by their peers and friends, including Peter Hujar, David Wojnarowicz and Zoe Leonard.

The exhibit is up through July 13 at SHFAP, 208 Forsythe St. between Houston and Stanton. Gallery hours: Wednesday through Sunday noon to 6 p.m.

There isn't any official opening on Wednesday evening, though we're told that friends of the artists will be in the gallery.
Posted by Grieve at 7:00 PM