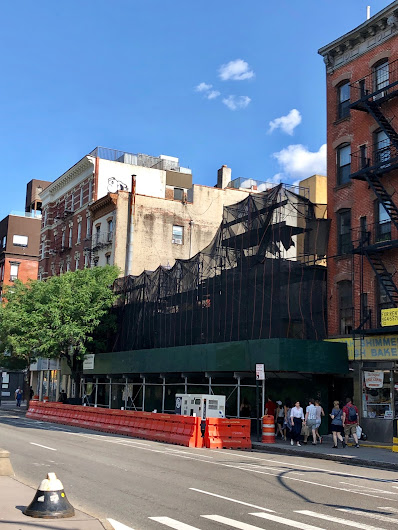 After sitting vacant for nearly 16 months, workers finally got around to starting the exterior demolition at the former Sunshine Cinema in late April.

Several EVG readers have pointed out that the circa-1898 building on Houston Street between Forsyth and Eldridge is shrinking into a pile of rubble now... 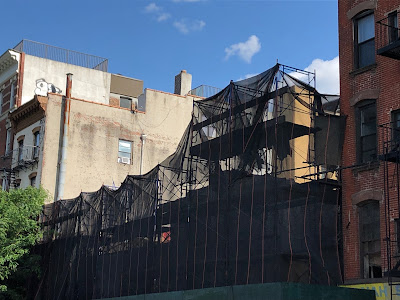 The property owners, East End Capital and K Property Group, have approved plans to erect a 9-story office building. Our previous post has more details on what's to come.

The boutique office building replacing the Sunshine Cinema will be 'unbounded by walls' with an outdoor space called Houston Alley
Posted by Grieve at 4:00 AM

This is devastating. When it closed, I could not believe it. I patronized this theater endlessly. It was a wonderful place. And I am furious that money and greed overtook it. Bastards.

Well my heart just shattered. I curse CB3 for allowing liquor licenses for every shady operator that comes along, but not this place, which might have saved it. And I speak as a former CB3 member who was on the SLA committee.

Congrats, CB3 members who made this happen, and fuck you so, so very much, you fucking civic vandals. We will miss this gorgeous building and the wonderful cinema it housed.

A group of petty/pathetic political appointees took this building from our community. All the joy/happiness/opportunity. And people wonder why 19% of the registered voters voted in the last mayoral election. ONE PARTY RULE. ONE P-A-R-T-Y R-U-L-E-!

I am not sure why CB3 gets blamed for the closing. Community Boards only make a recommendation to the State Liquor Authority. The Sunshine could have continued with the application process after the CB3 thumbs down--as other applicants have--and I'm 98% sure that Chairman Bradley would have approved a license. There was probably something else going on.

A double "fuck you" to the neighborhood can be found on the posted demo signage: "The Vanquish Group." Dicks!