What happened to the DeRobertis neon sign on 1st Avenue? 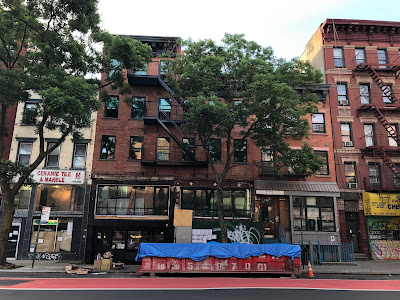 The sidewalk bridge recently came down outside the under-renovation 174-176 First Ave. between 10th Street and 11th Street... 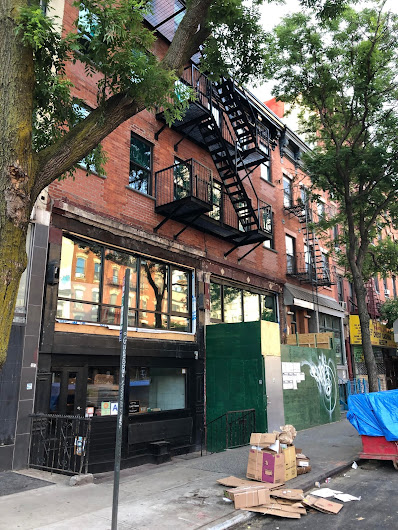 Several people, including Jeremiah Moss, noticed something missing on the post-renovation exterior: the neon "Pastry Shoppe" signage that belonged to the longtime tenant here: DeRobertis Pasticceria and Caffe. 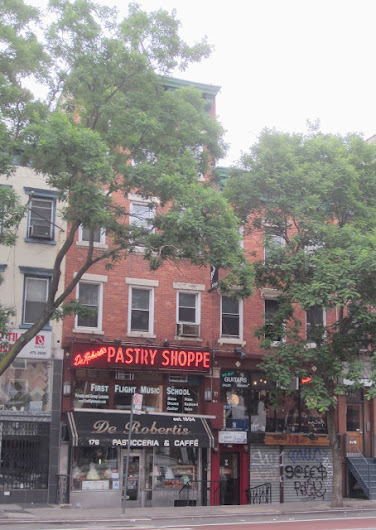 DeRobertis closed shop after 110 years in business in December 2014. The economy, age and health reportedly compelled the four DeRobertis siblings to sell the building (for $9.9 million, per public records).

Black Seed bagels opened in the DeRobertis retail space in October 2015. At the time, Black Seed co-owners Matt Kliegman and Noah Bernamoff said they wanted to keep the classic neon.

In response to inquiries from Off the Grid, Bernamoff and Kliegman ... tell us they also intend to keep the neon sign out front. Its fate was unknown; a member of the DeRobertis extended family had explained to Off the Grid that when the family chose to sell the building, they left the sign up because it had been affixed for so long that they feared removal could damage the facade.

“It’s not going anywhere,” Kliegman said today. Added Bernamoff, “We prefer to keep the neon as intact as we possibly can without misleading people.” They may choose to light only the “pastry shoppe” portion, for example...

Last week, Kliegman and Bernamoff said that they hope the sign returns.

Per a Black Seed rep: "The sign belongs to the building owner and we are not privy to their specific plans for the property, which traded hands again since the DeRobertis family sold the building over three years ago."


Per the Black Seed rep: "The plan was always that the building owner would refurbish the sign. The current owner, who was actually able to get the construction done ... has told us that the sign was removed to protect it and they are indeed working to refurbish it."

In May 2018, High Point Property Group bought the five-story walkup for $12.1 million. The seller was a joint venture between EBMG, LLC and AMJ Equities, according to The Real Deal.

In late 2015, the DeRobertis family decided to open another bakery in Clifton, N.J.

174-176 First Ave., home of DeRobertis Pasticceria and Caffe, is for sale

Let's take a look at the DeRobertis in-house bakery
Posted by Grieve at 4:10 AM