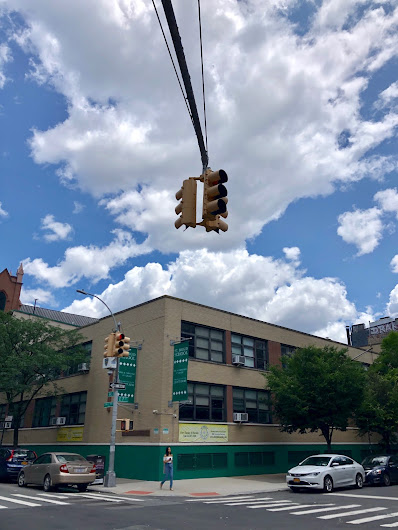 Classes ended for the summer last week at the St. Brigid School on Avenue B and Seventh Street.

As we first reported in early February, the Archdiocese of New York announced that St. Brigid School would cease operations at the end of the current academic year, a move that blindsided students, parents and faculty alike. According to one parent: "Kids sent home crying with a letter to their parent/guardian. School being closed by the Archdiocese without warning."

Founded in 1856, the Saint Brigid School was one of seven city Catholic schools marked for closure by the Archdiocese.

Despite the Archdiocese’s best efforts to maintain the operational and financial viability of the school, continuing to educate students in a building that is underutilized and in need significant improvements has proven unfeasible.

St. Brigid School students will have the opportunity to continue their Catholic education at another nearby Catholic School...

Stunned parents took action, launching a Twitter account and a Facebook group and petition ... as well as organizing a town hall to ask for more transparency about this decision.

Joseph Zwilling, a spokesperson for the Archdiocese, told the Post in an article on Feb. 9 that the school did have money left in its endowment fund — about $1.5 million. He also said the school was losing $850,000 a year. "It is a sad reality that it is nearly impossible to run a school with only 119 students in Grades K-8," he said. 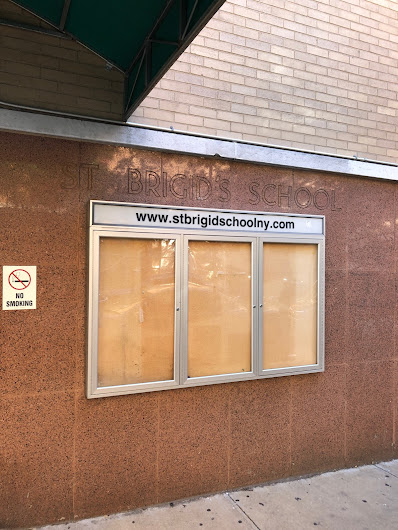 For now, no word on what the Archdiocese has planned for this prime corner real estate that overlooks Tompkins Square Park... 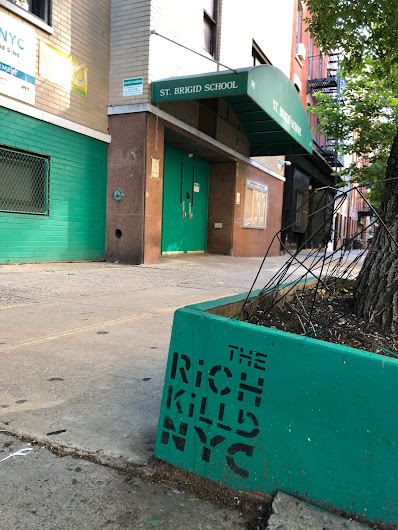 Previously on EV Grieve:
Report: What happened to the donated money earmarked for St. Brigid School?
Posted by Grieve at 4:30 AM

Make no mistake this land will be sold to a developer and a big luxury building will be built here. Avenue B is a small quiet "Avenue" with beautiful city park $$$$$$$$$$

This school was an integral and beloved part of our community. I live on C and 7th. I have walked past this corner every day since I moved to the EV in 2010. It was an intersection for children to learn, grow and roam. Now, as we are immersed in endless greed and overwhelming, undeniable domination from real estate developers and devious city officials who don't give a shit about anyone or anything other than money and power; we will be left with a gaping void and a soulless plot of land. I am not a parent nor do I ever plan to become one. Yet, I can empathize with those who are. Where will they go to send their kids? It pains me to witness a hideous, overpriced residential building erected here in lieu of St. Brigids. Very sad. And completely uncalled for.

There was a time St. Brigid's and the Rectory were to be demolished but a good Samaritan stepped forward to pay for the restoration. The school was built in 1954 and needed a good degree of renovation plus the attendance numbers are extremely low despite a increase in children living in the neighborhood. The Archdiocese owned the property and decided to close the school channeling it's efforts elsewhere.
Organized institutional religion is on the decline and many Catholic schools have closed over the past years (my old Catholic boarding school closed in 2001). No doubt this will become a luxury priced condominium building, decades ago it would have been a empty lot headed to be a community garden. The out cry belongs on two blocks up with the land-marked PS 64 which has been empty and rotting away for decades. Let the city take back this building and renovate it as a school this will leave the neighborhood with a school.

The recent history of St. Brigid is a study in stupidity. Why would you rebuild the church for 20 mill and not take care of the school with a declining student body? The school feeds church attendance. If the school is gone the church will follow. What a waste of 20 mill. If a portion of that money had been spent on school renovation and tuition subsidy the school would not be closing. And how much longer will the church remain viable before the archdiocese announces it's closing. And that the land has been sold... God. His children... the neighborhood lose.

The enrollment numbers are too low to keep the school open. Its that simple. Catholic schools in the outer boroughs and other cities are actually doing well. Manhattan has rich parents who scam their way into the districts with great public schools or use private non religious schools. People here demonize the church at every turn and then complain when they close a facility? Why would you even care what they do?

I agree with the inconsistent sentiments expressing hatred of the catholic church and rich people and then lamenting the closure of a private, catholic school. The cost of catholic educations have skyrocketed, in part because there are virtually no religious (i.e., free) faculty. My outer borough catholic grammar school cost $800 per family in the 1970s regardless of how many children you had, and all but 3 or 4 teachers were priests or nuns. I just looked, it is now $5700 per child, which itself is subsidized by the archdiocese and its own church. Churches support schools, not the other way around. St. Brigid's church was bailed about by an anonymous donor that was not so anonymous.

This has nothing to do with real estate developers or city officials. The Catholic Church of NY has determined that St Brigid's is no longer a financial asset worth keeping whatever the reasons may be. St Brigid's never got 20 million dollars. That money went into an investment fund. The CC doesn't just take money and spend it down. That's beyond naive. The NY real estate portfolio alone of the CC is about 6 billion. And all their shit is TAX FREE. They're no better than the real estate developers and city officials that people try to demonize.

I attended catholic school during the late eighties out west where I was raised. The tuition for both my brother and I was probably 500 a month, which is nothing compared to now. As a long time resident of this neighborhood, I have witnessed a fallout with attendance at this school and its nearby church. I strongly believe with the culmination of rising rents, operational costs and the pending lawsuits and uprise from the horrific misdeeds of priests and nuns coming to surface after having the truth buried for decades, parents aren't as willing or eager for their children to attend given the overwhelming climate of hypocrisy and complicity from officials deeply embedded into scandals who concealed their crimes by transferring them to other school districts and parishes. Catholic education isn't what it was when I was growing up as an adolescent. I think we will continue to see the decline due to their inability to address unresolved internal issues not to mention their draconian stances on women's reproductive health and LGBTQ rights. If they want to remain visible and relevant in 2019 and beyond, they will need to commit to some serious work in promoting inclusion for everyone and making reparations for the inexcusable and unforgivable behavior of the clergy who got a slap on the wrist. What does that teach our youth? What kind of values does that transcend if the church remains quiet? And people wonder why I haven't attended mass in over twenty-three years. There's just no point.

Signed by a lapsed Catholic and former altar boy