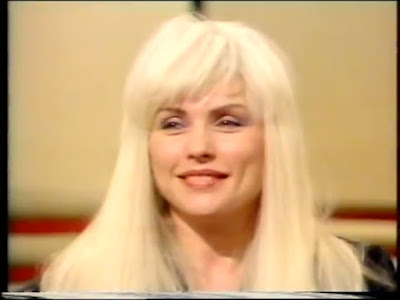 Meghan Fredrich, a former East Village resident who is currently living in Massachusetts, shared her first short film with me. "Deborah Harry Does Not Like Interviews," created from archival footage, shows how Blondie's Debbie Harry "endures years of superficial, tedious and demeaning questions from journalists until she devises a brilliant way to turn interviews on their head." The short recently made its premiere at the Maryland Film Festival and is now currently online.

Fredrich answered a few questions about the film, which you can watch below...

What was your introduction to Blondie? Do you recall the first time that you heard a Blondie song?

Were you instantly a fan?

I think like so many others I was immediately entranced. My childhood home was a sort of New Wave temple – my parents playing records of the Talking Heads and B-52s. As I got older and developed a more complete understanding of punk, I became deeply involved with Blondie and never looked back.

What are some of the qualities that intrigued you initially about Debbie Harry? Did these perceptions change at all during the making of the film?

Debbie is unequivocally charismatic, so I think that drew my initial interest. But Debbie always appeared to me to be a very substantial person. Despite the ongoing media obsession with her blondeness and appearance, she is not all on the surface or superficial in any way. And she always appealed to me as a truly modern woman — an independent spirit.

I knew these things about her before I began the film, but I think my appreciation of her integrity, cleverness and sense of humor deepened as I worked on it.

Did you start this project with Debbie Harry in mind? Or were you thinking more about exploring the way interviews are structured and how the media complex works?

It was the latter – I was thinking about the power relationship inherent in interviews and how the public accepts certain interview “norms.” From there I thought about who had been in the public eye for a long time, and Debbie came to mind. 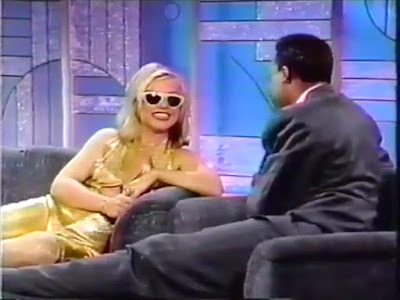 Though the montage of clips you found, we see Harry endure an endless number of idiotic and sexist interviews. How did you see her reaction to these interviews evolve as she continued on in her career, both in Blondie and as a solo artist and actress?

As time goes by, we Debbie’s emotional reactions to these questions and interviews change, as well as the strategies or tactics she deploys to manage them. She’s initially surprised, perhaps. Then expectant, evasive, using humor to deflect. She tries presenting a somewhat neutral front. Toward the end, you see flickers of anger, frustration and resignation. Until Minkie appears.

I’m surprised that the introduction of a stuffed animal — in this case Minkie — during interviews hasn’t become standard media-training fare for any public figure.

I know what you mean!

Do you think if she was an emerging artist today that she’d face the same type of questioning in the media?

You can see this clearly happening now with Billie Ellish. In an ad campaign recently for Calvin Klein, Billie says, “That’s why I wear baggy clothes. Nobody can have an opinion because they haven’t seen what’s underneath.” It’s a protective stance for an invasive world that would otherwise eat you alive.

Any idea if Deborah Harry has seen this?

We passed the film along to her people, but I don’t really know one way or another.

What do you want viewers to take away from the film?

How incredible Debbie is, to start! I hope they laugh while the watch it. But perhaps the overriding message of the piece comes from the lyrics of the song "I Want That Man." When Debbie sings “Here comes the 21st century/It’s gonna be much better for a girl like me,” we as the audience now watching in the 21st century have to ask ourselves: Is it?

I was a waiter at Bright Food Kitchen on 8th and 21st during the long, hot summer of 2002. Debbie would come in with a friend and sit at the same table near the window at least once a week like clockwork, and order lunch while wearing her sunglasses. She was kind and always patient with a smile. Even though I was a great admirer of her work, I didn't dare admit anything to her out of respect for her personal space and also due to my role in hospitality dealing with celebrities on a daily basis. Just by our interactions, I gathered Ms. Harry was clever, yet private in nature and mostly kept to herself. She wasn't someone clamoring for attention or praise like many performers today who maintain their relevance and popularity by accruing millions of followers on social media. I am sure she realizes her music is timeless and legendary. I consider her a trailblazer who contributed to classic rock and roll and who paved the way for other female artists. So grateful I was given the opportunity to know her for that small window of time.

With some decades behind us little has changed in regards to the lame, borderline insulting questions female entertainers and worst still female politicians are subject to from the press and other media. How often is a man's hair color discussed when they hold office in government?