A new sign for Ray's Candy Store, and a visit by Kim Kardashian West 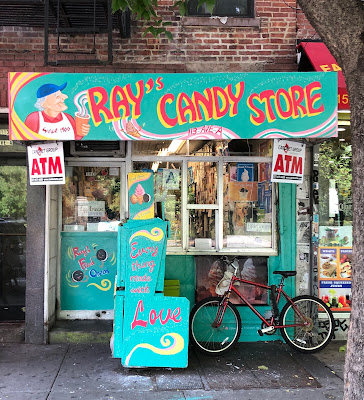 Here's a look at the almost completed new sign at Ray's Candy Store ... NYC-based illustrator Peach Tao (with help from Will DeNatale and Shreya Gupta) started work on Sunday.

Peach said she still has a few more details to add. 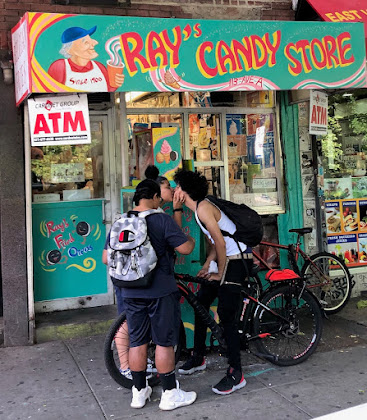 This version replaces the well-weathered facade that Chico created in July 2016. Chico's previous sign here was in part a tribute to neighborhood photographer Bob Arihood, who died in September 2011.

Early last evening around 6:45, Kim Kardashian West stopped by the shop here on Avenue A near Seventh Street with friends (besties?) Simon Huck and Jonathan Cheban to celebrate La La Anthony's birthday (this info via Instagram).

The reality TV star and makeup mogul shared photos/clips in her Instagram Stories showing the group ordering milkshakes and deep-fried Oreos from Ray, who was working behind the counter... 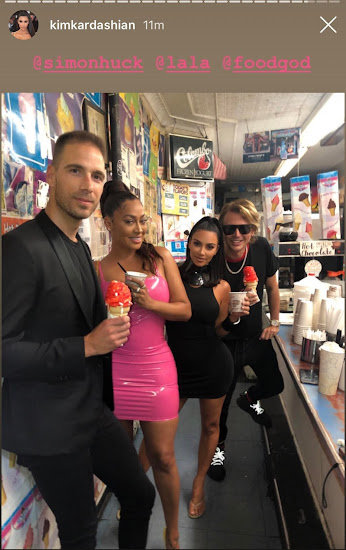 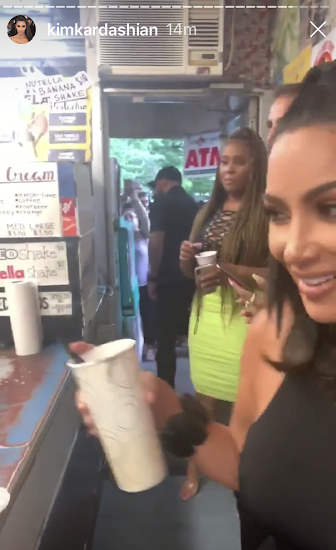 In true Kardashian fashion, there were reports of "a mob scene" outside the shop during the brief stopover, as Ray's was plunged into the paparazzi world ... with black sedans and bodyguards on Avenue A... 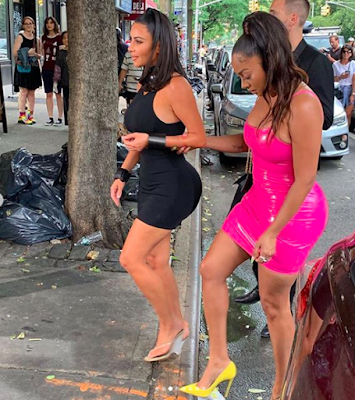 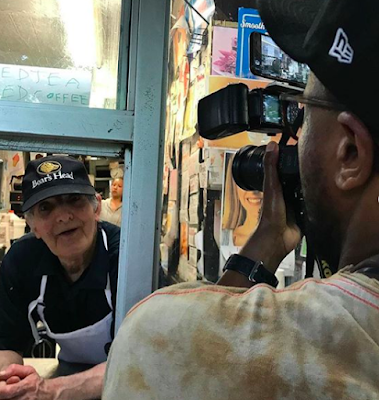 Last week, it was Kendall Jenner's turn to stop by Ray's.

Previously on EV Grieve:
Kim Kardashian was in the East Village on Tuesday, ever so discreetly
Posted by Grieve at 4:00 AM

And as much as I loathe the vapid Instagram culture, I hope the celebrity attention brings Ray good business.

I predict Instagram manic lines outside of Ray's for months going forward, how do we fight the influencers?

Ha! I'd love to know what Ray thought about all this hoopla.

It would nice if these celebrity types could give some Instagram love to gem Spa too. They can use a boost.

Kendall is an angel come to earth and I missed it!

How do you fight them? Easy and once again, the Simpson's had the answer years ago on a Halloween episode - "Just don't look!"

This isn't the first time that Ray had a bunch of strippers in his store, and it won’t be the last.

Hate the Kardashian's but Ray's could use any extra biz. So great!!!

"I predict Instagram manic lines outside of Ray's for months going forward, how do we fight the influencers?"

As stated above by not looking. Stop perpetuating the belief that "influencing" is a skill that can be mastered. Stop worshiping the individual (self, Kardashians, leaders, etc) as the enabler for a better society and start worshiping the community as the enabler. A leader can lead a group but the group must utilize the leader as resource of knowledge and action, not as a god. This way we embrace what the leader brings to the table rather than embracing the leader as a turnkey solution.

So this is why i couldn't walk down A on that block yesterday and I had to detour down 7th. fucking sweet. Cool they needed like 4 SUVs and an audience to grab a quick beverage.