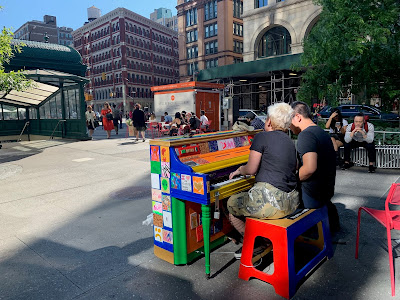 The Strand is officially a designated landmark — despite objections from its owner (NBC 4) Reaction: "The vote is a huge disappointment, as the City has refused to consider landmark designation or any other substantial protections for the nearly 200 buildings on a dozen blocks of this part of Greenwich Village and the East Village." (Village Preservation)

Seems like 2008: A bank branch for part of the former Coffee Shop on Union Square (Jeremiah's Vanishing NY)

"Russian Doll," filmed in the East Village, is returning for more on Netflix (Vanity Fair)

A WorldPride calendar of events (The Advocate)

The Jarmusch fest continues through the weekend (Metrograph)

When Johnny Thunders opened for the Replacements (Dangerous Minds)

Photos: The final days of the Streit’s Matzo Factory (6sqft)

Metro Acres Market will replace the Fine Fare at 175 Clinton St. on the LES (The Lo-Down)

... and the 6BC Botanical Garden is having one final orientation this year on Sixth Street between Avenue B and Avenue C.

Become a member of 6BC and help keep the garden beautiful.

Member benefits:
• Personal access to the garden. Once you have completed your membership workday and orientation, you will receive garden keys. You may then visit and work in the garden on your own schedule.
• Learn about gardening
• Have the opportunity to maintain garden plots
• Meet your neighbors
• Give back to your community