Report: 18 years to life for man who murdered Elizabeth Lee on Cooper Square 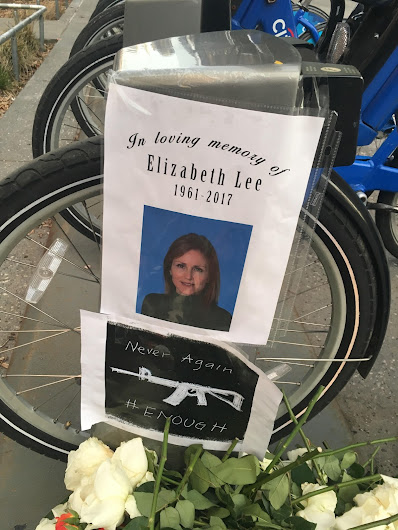 Vincent Verdi, a former federal intelligence officer, received a sentence of 18 years to life yesterday after pleading guilty to gunning down Elizabeth Lee on Cooper Square as she arrived for work on Nov. 1, 2017.

As the Daily News reported, Verdi, 63, "offered a self-pitying apology that drew jeers and groans from his victim’s loved ones" at a hearing in Manhattan Supreme Court yesterday.

“I can only hope one day the New York State criminal justice system will allow me to rejoin my family,” Verdi said.

“Never!” one critic said behind him.

“You’re the devil!” another chimed in.


Lee, who was 56 and a mother of two grown children, lived on the Upper East Side. She had just docked a Citi Bike when Verdi approached her and shot her twice. He then shot himself in the head.

According to previous reports in the Daily News, Verdi spent four months stalking and harassing Lee. Police had arrested him previously for stalking. She had an order of protection barring him from contacting her, which was in place the morning he killed her.

Lee was a longtime administrator at the nearby Grace Church School. She was remembered as a devoted mother and a friend to many.

Previously on EV Grieve:
Memorial for Elizabeth Lee on Cooper Square
Posted by Grieve at 4:15 AM

What a joke of a sentence. Why was the chance of future release ever even part of the equation?

i have been doing a fair amount of research on mostly forgotten murder cases in manhattan between 1980-2000 for a project i'm working on. part of said research involves scouring the NYS dept of corrections inmate database to find the current incarceration status of the offenders involved.

the number of killers who are paroled after completing just 30-40% of their sentence is staggering. these were men convicted of very violent crimes. a good number of the ones i have studied then re-offended—not through minor parole violations but by committing additional brutal violence on innocent people.

i'm not using this as a scare tactic. i believe in prison reform and rehabilitation as the primary purpose of incarceration. but it's become clear to me that new york state needs an overhaul in how violent crimes are practically punished. and i will be very dismayed if this guy is paroled in less than a decade.

Criminal justice 'reform' tends to mean lighter sentences and less punishment regardless of the crime. People here always seem upset about the sentences people get - yet you vote for and support 'progressive' candidates who support these policies. Closing Rikers Island will leave NYC with a max capacity of roughly 5000 prison slots. The only way to avoid overcrowding is to stop arresting people. Has anyone thought about any of this? When there is no death penalty and no life in prison without parole sentence this is what you get. You get what you voted for and claim to support. Why do you think every crazy homeless guy on the subway has been arrested 47 times and never spent more than a month in jail?

@12:56pm: I'VE definitely thought about it; too bad we can't get the people in charge in NYC and Albany to think about it.

"Every crazy homeless guy on the subway" is mostly being picked up for crap like fare evasion or public sleeping, not cold-bloodedly murdering an innocent woman. It's a lot easier to complain that destitute ill people are the problem than to accept that it's garbage men like Verdi with homes and jobs who terrorize women in this city.

I hope he dies in jail.