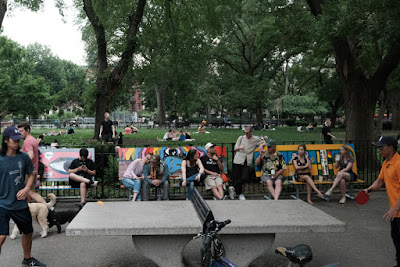 [TBT to Sunday in Tompkins via Derek Berg]

• Exploring 23 LGBTQ landmarks in the East Village and Noho (6sqft)

• Pride and Stonewall through the lens of Fred W. McDarrah (The New Yorker)

• Opinion piece on how the NYPD ignores reckless drivers who injure cyclists (Streetsblog) Hunter College survey finds that nearly one-third of Manhattan cyclists are distracted by electronics while riding. Also in the survey: Only 2 percent of pedestrian injuries are caused by people on bikes, according to NYPD data. (The Post)

• In the West Village, Three Lives & Company bookstore is back in action after a DOB-mandated building closure (JVNY)

• "Jaws" and "Eraserhead" play (in separate theaters!) this weekend at midnight (IFC Center)
Posted by Grieve at 10:30 AM

I wonder what the percentage is of drivers, especially those Uber, Lyft and Via folks whose are always trying to figure where they are on their phones-GPS's?

I'm mystified that Eater didn't include Black Seed in their Bagel roll-up. Sure, they're hipster bagels, I guess, and god knows we all miss DeRobertis, but they're easily on par with Tompkins Square Bagels (and that's saying a lot).

It's too bad Fenty isn't one of those dealers who dips into their own stash. Selling people fentanyl as heroin is beyond a dick move.

I agree with 2:01 that Black Seed's bagels should be on the list. I don't know what "hipster" means in this context, but they are cooked in wood-burning oven, Montreal style, and are my go-to bagel.