The New Museum unveils plans for expanded facility on the Bowery 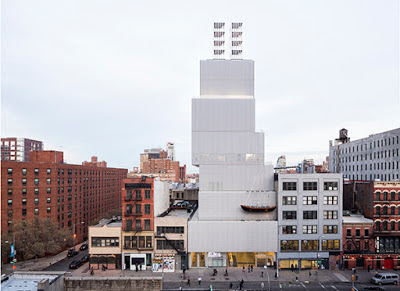 The New Museum yesterday revealed plans for its planned expansion slated for 2022 ... here's a look at the new structure designed by OMA/Shohei Shigematsu and Rem Koolhaas proposed for 231 Bowery, which will include a ground-floor restaurant... 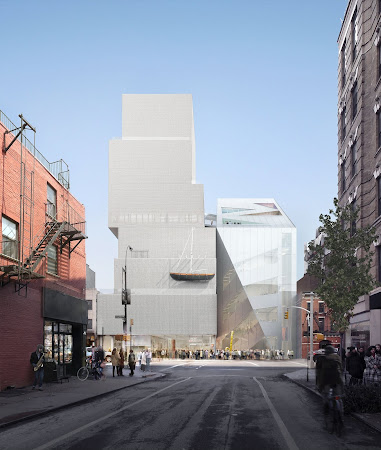 And here's the announcement via the EVG inbox...

The design complements and respects the integrity of the Museum’s SANAA-designed flagship building and replaces the Museum’s 50,000 square foot adjacent property at 231 Bowery, acquired in 2008. The new seven-story, 60,000 square foot building will include three floors of galleries, doubling the Museum’s exhibition space, along with additional space for the Museum’s many community and education programs ...

And the funding for this?

To date the New Museum has raised $79 million toward its Capital Campaign goal of $89 million, with $63 million in construction costs. This includes $3.1 million from the NYC Department of Cultural Affairs, with funding provided by the NYC Mayor’s Office, New York City Council, and the Manhattan Borough President’s Office.

A total of $1.84 million has been awarded under Governor Andrew M. Cuomo’s Regional Economic Development Council Initiative, through the New York State Council on the Arts and Empire State Development. Groundbreaking for the new building is scheduled to start in 2020. The Museum will remain open and operational during most of the construction period, with a projected opening in 2022.

And what will be in the new building?

The Museum acquired the current building at 231 Bowery eleven years ago to provide additional space for expanded programs. Gradually over the past decade, the Museum has used the building to capacity for a range of activities including additional gallery space...

The layout of the building program is as follows: lower levels devoted to back of house and storage; the ground floor to feature a new restaurant, expanded lobby, and bookstore, along with a public plaza set back at street level; second, third, and fourth floors for galleries; fifth floor for NEW INC; sixth floor for an artist-in-residence studio, as well as a forum for events and gathering, which leads to the seventh floor for Education programming and additional events; and an atrium stair on the west façade, connecting each of the floors, along with an elevator core at the front and rear.

Meanwhile, per published reports, the cost of the expansion has been a point of contention for the New Museum union (formed in January), "which has alleged that its workers are not being adequately paid by the institution."

As ARTnews reported, around 50 workers attended a demonstration outside the museum on Tuesday evening, distributing flyers "claiming that management had 'disparaged' the union’s wage proposals."

The New Museum opened on the Bowery in December 2007.

Previously on EV Grieve:
The New Museum is expanding on the Bowery
Posted by Grieve at 4:05 AM

This is a fine kettle of fish - a building, out of character for the rest of the block but similar in size to the other buildings, will swell up into a grotesquely oversized hulk, overshadowing (literally) not only its own block but the facing side street as well.

Yo, architects: It's possible to design buildings that don't look like the cargo of a UPS truck.

Blah. Nothing can penetrate those egos.

Well, maybe this new addition "complements and respects the integrity of the Museum’s SANAA-designed flagship building", but it does not do anything even remotely resembling the same for the small old historic buildings still extant on this formerly interesting and eclectic street.

I'm so happy millions of my tax dollars are going to this degenerate shit. Meanwhile surveillance pods go up every 50 feet on the avenues to dead silence by the pseudoleft.

With every news museum building there is always the promise of more exhibition space, and rarely does that happen. It always seems that permanent collections get pushed back into the reserve rooms to make way for the flavor of the month. The New Museum doesn't have a vast permanent collection, and from my experience, they have never been friendly to East Village artists. In my memory they have never shown on a regular basis works by Paul Thek, David W., Barbara Ess, Meg Webster, Bill Rice, Richard Morrison, and others regular readers of EV Grieve could cite who lived and worked in the East Village. Another enlargement of a museum space dedicated to the whims of curators who are currying favor with dealers and collectors is what we will soon find on the Bowery. The NM will get their new building, and it will be what it is, but the struggle for the artists who lived and worked in the East Village to get some recognition for their work will go on without the NM's help in clarifying what the East Village scene was like.

@annon 11:42AM
Perhaps you could have mentioned a few artists that are alive or under the age of 65. Those folks are all baby boomers...there are artists still living and working in the East Village.
In any event a museum is better than an over priced high rise with a bank/gym on the street level.

@2:02pm: Sorry, do older artists not count? Would you say Picasso should have been shunned after he turned 65? Sheesh, what egregious age-ism!

All cultural institutions are selfish , self indulgent and operate in an environment best described as claustrophobic. The Public Theater is no better. These institutions adopt the neighborhood vibe for their own marketing purposes but keep the neighborhood at a distance in terms of the work they present. But as somebody else said... it's better than an apartment building.

There was nothing "downtown" or "Bowery" when this pristine stack of boxes opens some years ago. I never expected it to exhibit local artists' work I don't think that's how museums work generally. I have enjoyed about half of the exhibitions I visited which is a pretty good average in my book. I imagine this location was picked because the land was cheaper than uptown.