The New Museum is expanding on the Bowery 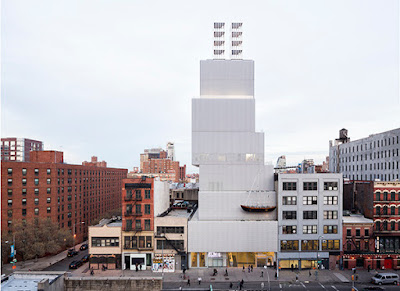 The New Museum will nearly double its size on the Bowery.

Here are some details via the EVG inbox...

The New Museum is launching an $80 million capital campaign to mark both the Museum’s fortieth anniversary and its tenth year on the Bowery. The campaign, which will support expansion and growth of Museum programs and more than double the endowment, has already received $43 million in lead gifts from several members of the Board of Trustees.

After nearly a decade on the Bowery, during which visitation has grown by 400 percent and the number of people served by its programs has grown 4,000 percent, the New Museum is bursting at the seams. Renovating its adjacent property at 231 Bowery will provide additional space for programs while adding urgently needed office and support spaces. The expansion effort will ultimately enable the Museum to double its exhibition galleries, expand educational initiatives, improve circulation, add more public amenities, and improve the visitor experience.

231 Bowery was home to Daroma Restaurant Equipment until the spring of 2011 when they moved down the Bowery (and the owner pleaded guilty to tax fraud). The New Museum bought the building for $16.6 million in September 2008.

According to The New York Times, the address once provided "raw studio space for seminal New York artists like James Rosenquist and Tom Wesselmann."

The combined 231 and 235 "would increase the museum’s footprint for exhibition space, storage and offices to a little more than 100,000 square feet, from 58,000 square feet now," per the Times.

So in their lexicon, does "renovating" mean "taking down a nice old building or two so we can pay some idiot posing as an architect a shithouse full of money to design yet another stacked up pile of misshapen blocks in a staggered pattern that makes it look like the pile is going to come crashing down on the privileged new denizens of the Bowery at any moment like some crazy modern art version of Jenga"? Or what?

Good thing The New Museum is in the Lower East Side and not the East Village. I'm glad that they have respected that difference and haven't really tried to push into our litle neck of the woods.

I don't expect that the New Museum will be doing anything to perpetuate the heritage of artists who lived in the neighborhood. They see their mission as showing developing artists. It would be nice if they took a glance at artists like Paul Thek, Richard Morrison, Meg Webster, Bill Rice, and others who lived and worked in the neighborhood and whose presence made it a vibrant community.

Only "major" museum in NYC I have not been to. Ain't no interested. and my cup of tea. There are galleries in the neighborhood that are better to visit, and most are free. Who knows, maybe in fifty years, this would be the next MoMA.

I haven't seen much I've liked at the New Museum. I don't know why.

The past Ideas City Festival was toned down in comparison to the one prior which took over the whole Lower East Side. I thought it was really bad for the area, sided with luxury housing developments,bad cocktail lounges, bad restaurants, etc., and overshadowed residents who are hanging on. I do think they should keep the event inside and on their block.
They thrive on tourism, so are of course, pro hotels, restaurants, cocktail lounges, and etc.. While the festival gives a forum to a variety of groups and ideas the institution isn't going to take an active position against the atrocities that have transpired and continue to in the area. They throw some bones, one towards the Bowery Mission, but that doesn't mean that they aren't pro gentrification, development, etc., and that they aren't trying to capitalize on the East Village. It is indeed a good time for them but times are hard. And wow their trustees must really have some big money. I wonder where they live. Probably on the Bowery and in the Lower East Side. But that's not the East Village.

There was a Paul Theck retrospective at The Whitney years back. It was incredible. Please don't give them any ideas. Paul doesn't need to be over there. I don't think he would like what has happened to the neighborhood.

The New Museum was involved with The BMW Guggenheim Lab and is a supporter of First Street Green Art Park which came out of the BMW Lab. it's a tourist attraction. It's good propaganda for the city and real estate development.
I see the wall of murals along the Houston side as some kind of great facade. Honestly they can paint whatever they want to and it will only favor gentrification. Even if they painted portraits of all the evil landlords, it wouldn't stop these pukes from moving into their buildings, and the landlords would probably make a joke out of it and find a way to capitalize on it.

@1:34 They have perpetuated the artists who lived in the neighborhood. There have been shows with these people. Solo shows and group shows. Years ago they did this vido piece where long time neighborhood artists talked about how it used to be and how it is now. Since then the neighborhood has worsened to an unrecognizable, intolerable and practically unlivable level. The artists weren't really rebellious. They weren't like fuck this or this is wrong or anything. I saw the video piece as conformist.

Are you suggesting the New Museum maintain the other buildings as an art gallery?! Accommodating some12 people at a time and creating huge limitations a museum can't operate with because an artist once lived there? Artists have lived all over the east village, should we never touch any of those either? Give me a break.

The infantile whining here has become a parody of itself. Should propose it as a performance piece at the museum.

Is there any reason why there are no benches in the First Street Green Park, is it because they don't want homeless people to hang out there? This should be an East Village Park not an extension of the New Museum. The East Village is a residential neighborhood not an entertainment district, which is what Times Square is classified as. Moreover, at the time of the BMW Guggenheim Lab, First Street Green was like, we don't know what we're going to do with the park, they knew exactly where it was headed.

Yeah ok. We are an entertainment district in some capacity but the East Village zoning is different than the LES zoning becuse we are mostly protected by height and use restrictions. The commercial overlays were designed to have daytime retail that serves the residential community.

We are an entertainment district, it's called Disneyworld.

The area's history of art and culture doesn't have anything to do with what is transpiring now. The art park makes it seem as if the radical art of the past never actually left. The art of the day was an expression that came out of the area. Artists were eventually pushed out and forced to relocate, like Missing.