Report: ABC No Rio set to close next month ahead of demoliton for new building 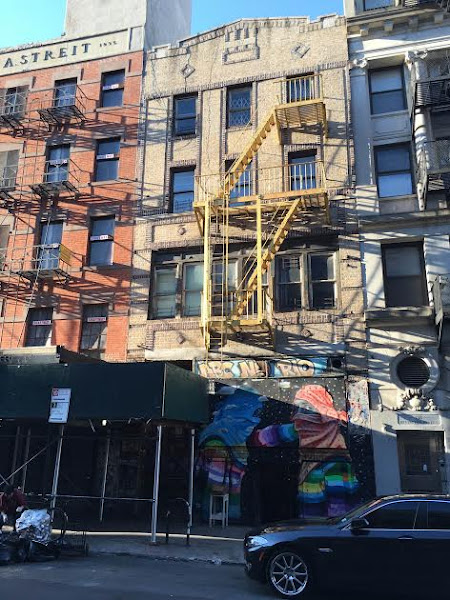 ABC No Rio first unveiled plans for a new building on Rivington Street back in March 2008. Now, after delays "by red tape and rising costs," The New York Times reports that the cultural center here between Suffolk and Clinton will likely be cleared out by the end of June, with a demolition to come this fall.

The decision to act now, the Times notes, came after developers paid $30 million for the former Streit's matzo factory next door that will become condos.

Per the Times: "Given No Rio’s age and condition, the structure seemed unlikely to survive the demolition next door." 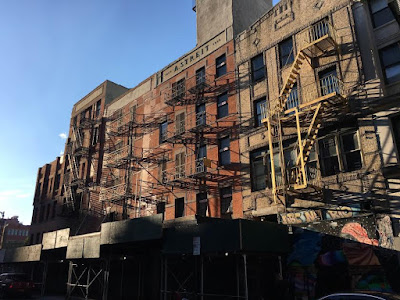 No Rio plans to replace its fragile four-story home with an environmentally friendly new structure where artists will continue to present the same type of boundary-pushing material that has become the center’s hallmark.

And from ABC No Rio’s director, Steven Englander:

On a recent evening Mr. Englander reflected on No Rio’s future, including the question of how to maintain its oppositional ethos in an ever-gentrifying environment.

That animating spirit, Mr. Englander said, comes from the people inside the building rather than its surroundings. If anything, he suggested, the changes in the neighborhood may make No Rio’s willingness to explore the margins more vital.

“Nobody knows what New York City will be like when this hypergentrification catches its breath,” he said, adding: “I’m pretty confident that people in line with the mission and purpose here will always be around.”


ABC No Rio's impressive zine collection recently moved to the nearby Clemente Soto Vélez Cultural and Educational Center... while the Saturday matinee punk shows will move to various venues across the city.

You can read more about the new building and check out the renderings at the ABC No Rio website.

“I’m pretty confident that people in line with the mission and purpose here will always be around.” Good for them although I doubt the artists they are speaking of will be able to afford this city or have any interest in living here in the coming years, yes it will get that vanilla downtown.

It's OVER. I'm preparing to leave after 45 years in this neighborhood.

It is really imperative that No Rio survive. It is one of less than five remaining local community centers run on a collectivized, cooperative organizational basis, that has programming directly populated by local artists. It is fundamental to preserving, strengthening and teaching the cultural identity and heritage of the local community. Such places were the norm in the neighborhood only fifteen or twenty years ago. Social cleansing ( what you call 'gentrification' ) like what happened to Streit's is largely the cause for the mass extinction. Unfortunately, with the routine corruption and bureaucratic red tap endemic to NYC, we will be lucky to have anything back in No Rio's place before ten years.

I understand that they solicited and collected funds in order to SAVE the building, not to DESTROY it and REPLACE it with a new one.

Claiming that a demolition next door would endanger the ABC building is NOT a valid reason for demolishing ABC NO RIO!!

They ought to be forced to return the money they received under FALSE pretenses.....

chris flash, they've been saying for over 10 years that they are raising money to build a new building. The pending demolition of the building next door just moved the timeline up a little. Have you been there lately? the place is going to fall down soon no matter what.

It's arguably the most rickety building around. I wonder if the builders next door who have made it even more unsound due to their construction have provided compensation to ensure it really gets rebuilt.

Anonymous 11:54: When I was solicited for a donation which I made, I was told that they were SAVING the building by bringing it up to code. NOTHING was said about demolishing and replacing it.

I HAVE been there lately: NO sign of life and NO access to the wonderful media center and library that is supposed to be available to the public either....

Eric from no rio here. I'm really confused about your anger about this.

When we first started fundraising 18 years ago, our goal was $100,000 to renovate the building and get it up to code.

However, when we had a structural engineer come to look at the building so we could make a renovation plan, the report stated that the building was in such bad condition that renovation was not possible. Had we attempted to renovate and bring things up to code, the building would have collapsed during the process.

At that point, we were very clear with our supporters and fellow activists and artists. The plan had to change. If we were going to continue to exist as an organization and community resource, we were going to have to raise enough money to rebuild the building.

This has been public information for at least 9 years and we have been as transparent as possible about the plans and where the money is going. The architectural drawings for the new building have been public for at least 8 years.

So, it's possible that you have just not been paying attention but there's been no attempt to mislead anyone.

We've been slowly moving things into storage for a while, but the computer center, zine library, darkroom and screen printing room have all continued to operate (although not every day, but the schedule has always been on the abcnorio.org website). Sorry if things were not open the day you showed up, but you seem to be making a larger accusation -- and one that is rather insulting and unfounded.

The fact that this rag-tag group of artists and activists has managed to raise enough cash to rebuild is a great thing, I don't understand why you are so angry.

Sure, we all love the existing building but saving it is quite literally impossible. But, when we're done there will be a new and permanent home for political art and activism in the neighborhood. Who can find a problem with that, right?