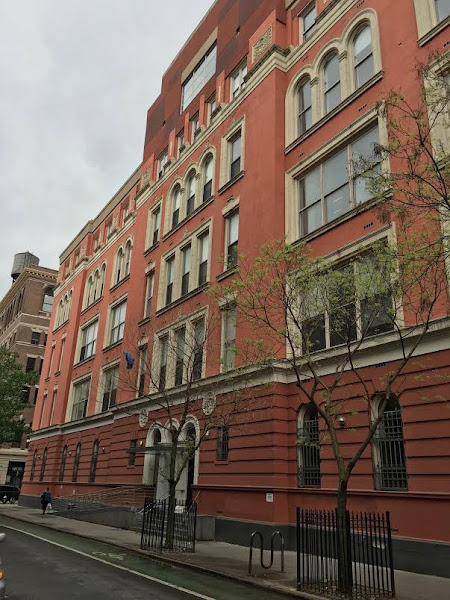 More headlines about the controversial sale of the former Rivington House on the Lower East Side.

To the usual recap: In February 2015, the Allure Group paid $28 million for the property, promising that 45 Rivington — the former Rivington Center for Nursing & Rehabilitation — would remain a health facility. In November, a city agency lifted the the deed in exchange for the Allure Group's $16 million payment to the city. Earlier this year, Allure then reportedly sold the property for $116 million to the the Slate Property Group, a condo developer who plans to create 100 luxury residences in the building that overlooks Sara S. Roosevelt Park.

It's been 30 plus years since Regan and his followers sold America on the "trickle down economics" bullshit and the complete opposite has happened since then. A building owned by city taxpayers for the care of it's dying has been sold for luxury living. This administration has failed us, and thing the Mayor can do to save his career (and our city) is to reverse this sale and prevent this sell off of our land going forward.

So OK take the property back what follows next? The previous usage was done so we get a building back that is vacant for ten years? Gee a developed building paying property tax how awful.

How was "the previous usage done," Anon. 4:46? Has every senior citizen in New York suddenly vanished, leaving no one to need elder care or housing? Is that the same reason Ben Shaoul emptied out Cabrini on 5th and B to turn it into yet another fratboy playground? Does *every* building in the city need to be turned over to the rich and privileged? The only reason Rivington House was sold is not, as you seem to suggest, because no one needed it in its old incarnation any more, but because once more greed won out over humanity.

At 9:50 PM, Gojira said:
How was "the previous usage done," Anon. 4:46? Has every senior citizen in New York suddenly vanished, leaving no one to need elder care or housing?

There are no more AIDS patients either, Gojira—at least not any that can afford to live in luxury housing.

The old Cabrini nursing home was a ridiculously good, friendly, and useful rehabilitation center; places like that just don't make sense in this ever-changing city.

old people need to move to the bronx and astoria

for now, there is no room for them in manhattan

in the future when those areas get priced out,

maybe binghamton?did anyone expet bill to be

How was "the previous usage done," Anon. 4:46? Has every senior citizen in New York suddenly vanished, leaving no one to need elder care or housing?
I am glad the building itself is being preserved as opposed to being demolished. Transferring ownership for another party is not evil it shows a healthy economy. People who make little demands on social services and provide much need tax revenue should not be scorned after all only so many people can ride in the little red wagon as others pull it. Thinking of Venezuela right now remember socialism runs out of other people money.

The previous usage was not "done" nor was Rivington House 'vacant'. 115 hospice residents were evicted from their home. The almost 300 staffers were let go, had their wages reduced, hours cut and/or moved to other sites after caring for these residents for decades. This building could have easily absorbed others in need of skilled nursing care: elders, disabled, etc. (not to mention the current desperate need for housing AIDs survivors so they can care for themselves -admitted by both Cuomo and de Blasio).
The VillageCare 'owners' (who indeed were using a deed restricted -for decades- building that was built by the public, for the public, and later retrofitted with public tax dollars) conveniently emptied the building once. The next 'owners' 're-opened' RH as a general nursing home and miraculously could find no elders to house in it! They conveniently showed the State Department of Health an empty building, forcing it - by law- to close. Why were no elders in it? The Allure Group Director claimed VillageCare had 'ruined' those contracts for them. The Allure Group was shopping the building around long before the deed restriction was even lifted and while they were in talks about its future as a nursing home. Rivington House was taken from the public by what appears to be fraud, incompetence, gross profiteering or all of the above.
As to those 'tax dollars' you think are going to roll in from wealthy people- most profits are off-shored now or have tax loopholes to avoid such inconveniences.
Then again, I guess that's what is meant by a "free" market?