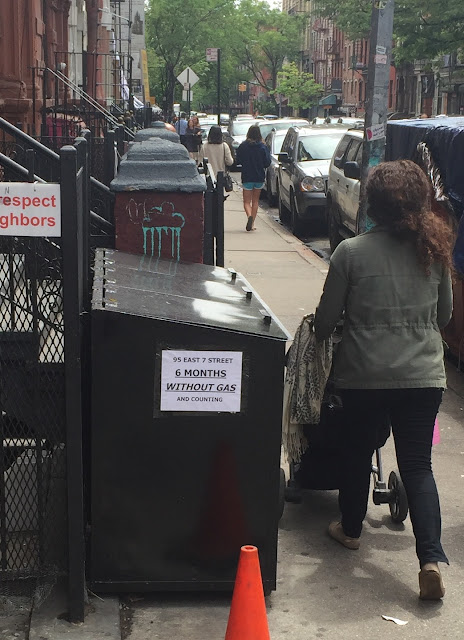 Some residents at 95 E. Seventh St. have been posting flyers noting how long it has been since they've had gas for cooking in this building between Avenue A and First Avenue... (today marks Day 193)... 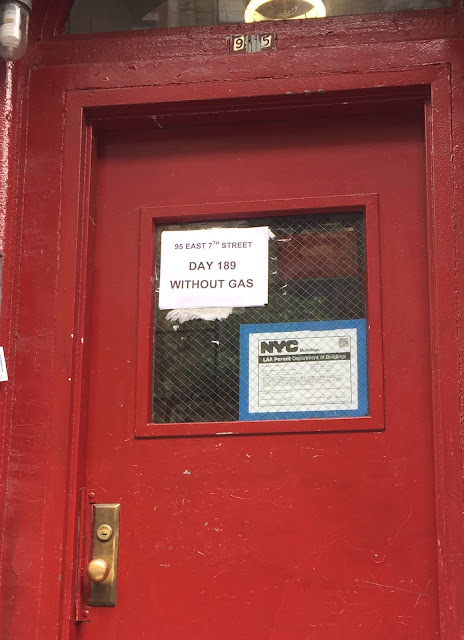 According to public records, the building sold last September for a little more than $6 million. It had been one of the numerous East Village properties owned by Morton Tabak and Co. (This is one of the 16 East Village buildings that Raphael Toledano purchased last fall.)

A resident told us that Brooklyn-based Halt Management is in charge of the building now.

Per the resident: "Our beautiful, late 19th-century tenement has been abused and destroyed during the seven months of construction with the goal of creating 'luxury units' out of the few vacant spaces." (They've also been without a super, per the resident.) There are several complaints on file with the DOB in recent days, including one from last Thursday noting "the walls are cracking and tenants are fearful for their safety."

The resident says that the management company has provided them with hot plates, and that, in total, they've received $150 in rent abatements. 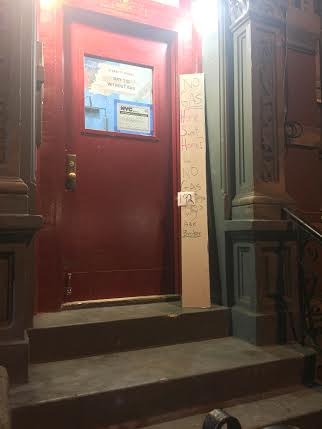 An EVG reader shared this photo... festive balloons with the No Gas message... 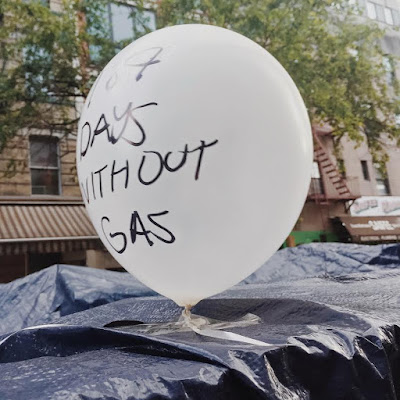 I feel for them. I was without gas for nearly four months and a hot plate does not cut it. Keep up the shaming! These landlords just don't care.

Another few words: The mayor ought to hold a press conference in front of this building to address the reasons that the city isn't helping these tenants.

hope they've organized
if not, time to do so

Where is our council woman? She should be in front of these buildings and holding a presser... just to shame the landlord and the mayor. We just don't have politicians who care. We have to hold their feet to the fire. We have to stop rubber-stamping their election because of their party or race. If we don't this is what could happen to all of us.

If anyone has dealt with Con Ed - they know this is a con ed delay. getting gas restored to buildings is a very complex issue that Con Ed handles and it takes a very long time. Politicians should be pushing for Con Ed to restore the gas quickly. Landlords don't want a building without gas - they have to pay rent concessions, deal with tenant issues etc.

why should the landlords care? the people complaining will eventually move. the new, incoming renters will have no clue that the management are vultures and will pay the high rent. the cycle will then continue.

A tenement building might be many things, but beautiful is not one of them.

On June 9th it will be 1 FULL YEAR without Gas at 445 East 9th Street owned by Icon Realty. Icon was caught performing work without a permit and shutting down the gas without proper permits or Con Ed. I am grateful to be alive after Icon recklessly tampered with the gas lines. I think they were fined $600. That is the city's answer.

I am a resident of this building and the delay is not caused by ConEd.

Our new landlord installed a new gas line (which was probably not even necessary to begin with) and the plumbers finished the work just this week.

Landlords do not need to provide gas since they are full of hot air.

Balloons and flyers are good public relations start, now you need to put some legal screws against them or they won't pay any attention. They don't care unless they think their own bank account is at risk. Complete narcissistic selfish pariahs who weren't raised right and think economic oppportunity for themselves comes through human suffering for you and it is your fault for being in "their way".

They do care, they care if you don't pay the rent, but they don't care when they don't provide services their leases promises to provide.

Man, we should have done public shaming like that. We were without gas from Thanksgiving 2014 to September 2015...and all the landlord gave us was hotplates. But he did end up replacing all the gas lines and giving some of us new stoves. Even so... I hope this building gets the gas restored swiftly.