Unearthing retail history at 2A 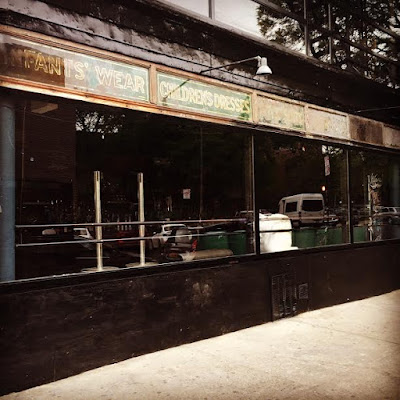 If you walked by 2A in recent days, then you may have noticed some ghost signage that has been unveiled ... for infants' wear and children's dresses... 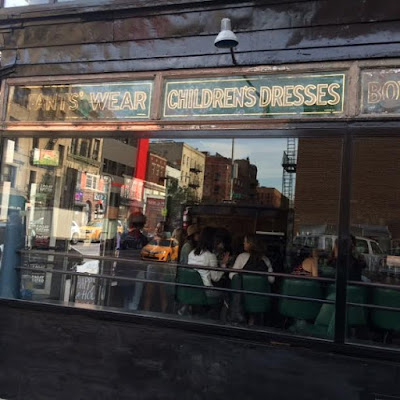 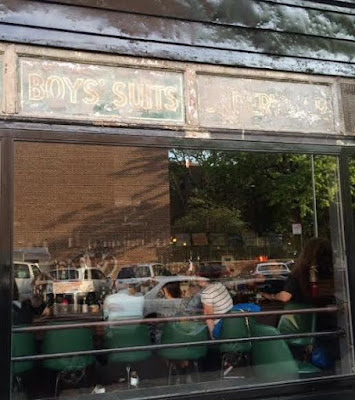 Daytonian in Manhattan provides some fascinating history of the building on Avenue A and Second Street.

In 1868 the Teutonia Savings Bank was incorporated and its handsome bank building erected on the site of No. 25 Avenue A. The architect is unclear; however the structure bears striking similarities to the work of Nicholas Whyte who was working in the area. His Irwin Building, completed the same year, at the corner of Bowery and Bleecker Street includes several similar elements.

The four-story Italianate structure was faced in sandstone on the Avenue front and with red brick on the side elevation. The bank's architecture presented potential depositors with a sense of stability. Rusticated stone piers, handsome Corinthian pilasters between the upper openings on the Avenue side, and carved stone lintels with double keystones along 2nd Street spoke of the cost of the edifice. To the rear a stoop led to the arched doorway of the upper floors.

The offices on the upper floors were leased and the Teutonia Savings Bank operated from ground level. Things went smoothly for a decade before the bank collapsed under scandal and fraud.

In March 1878 a stranger who gave his name as H. G. Wagner attempted to open a bank account, using a draft for $2,750 drawn by the banking firm of Gossler & Co., in Boston. The check was accepted; but bank officials were suspicious and investigated the matter. It turned out to be a forgery and a detective was put on the case. He sat for days in the President’s office, where he could watch the bank patrons come and go through the glass door.

Wagner was too clever to personally return to withdraw funds; and he offered John Campbell 50 cents to cash a check for him. Campbell ended up being arrested and Wagner was never caught.

But that was the least of the problems for Teutonia Savings Bank. Four months later warrants were issued for the arrest of all 15 trustees of the bank. On July 15 the New-York Tribune ran the headline “Misuse of Bank Funds” and reported on the nearly $30,000 of assets the men had distributed among themselves.

The post doesn't have any mention of the retail space when it served in more recent times as a children's clothing store, as the signage shows (2A has been here since 1985)... and it's not clear if this will remain outside 2A or it's just a temporary reveal. 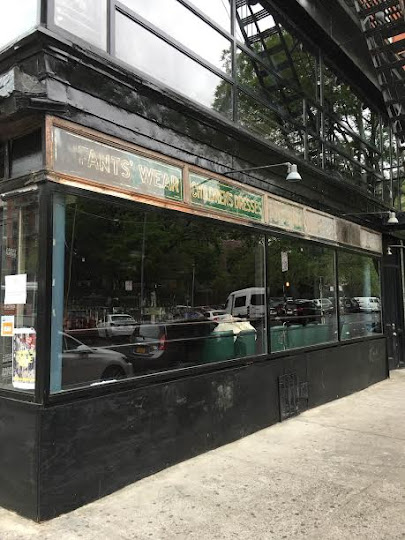 Email ThisBlogThis!Share to TwitterShare to FacebookShare to Pinterest
Labels: 2A, East Village history

Well, it WAS a handsome building until the first and second floors were hideously butchered...

Newbies, transients, and tourists don't care about history, only care about mixolgy. As long as they're getting their bloodys, mimosa, and bellinis in an "authentic" and "rustic" joint(oh look, so cool, so old-fashioned, feels just like Williamsburg, lemme Instagram, Sanapchat and foursquare this moment.)

The signage is staying.

Who ever is photo-ing that site, take pictures of the signs from the inside looking out.

"authentic" and "rustic" joint(oh look, so cool, so old-fashioned, feels just like Williamsburg

Go a few blocks east and it almost feels like Brooklyn, according to some realtors.

Meanwhile, realtors on the other side of the river want to persuade people that they're "almost like Manhattan." Confused yet?

The lower end of Avenue A was home in the early- and mid-20th century to many baby and children's stores, including Ben's Babyland (remember them?) and Schacter's, which I think was baby furniture for the post-war set.

An Internet search turns up nada, but Joyeria Pepe (which was at 79 Avenue A, pre-80s) still survives in Washington Heights.

Barbara, I hope that's true! Do you have intel? It's so beautiful. (Why is ghost signage always so evocative??)

I don't know if the baby store Scuba Diva is referring to as Schecters is actually Schneider's, where we got my first kid's crib and stroller, or another baby store that no longer exists. But I had the WEIRDEST conversation with an elderly saleslady at Schneider's. She was telling me about a friend's daughter who got involved with the Hell's Angels. She lowered her voice and whispered in that ptui-ptui-ptui way that old Jews used to use when saying "cancer": "They made her pull a train. Do you know what that means?" I nearly choked.

I would imagine judging by what it looks like, and knowing the owners style, that it'll probably stay. It fits in with their vibe and outlook and all that. Hope it stays.

Yes, I have intel, being a 2A regular.