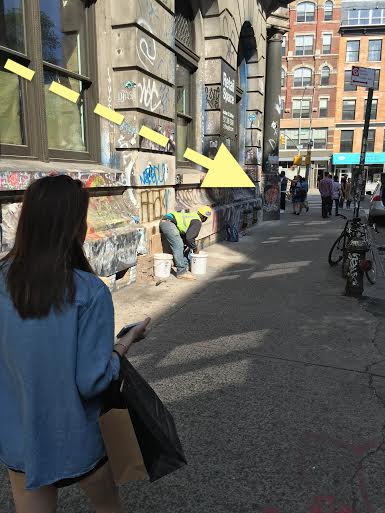 The last time we walked by 190 Bowery last week, there was all sorts of activity going on in and around the historic Germania Bank Building on the corner of Spring Street. Hard hats were coming and going from inside the building. Arrows were trying to knock over workers. And a few men were filming a rap video on the front steps.

So what's going inside? Aby Rosen's RFR Realty owns the building, and a company made up of agencies representing creative professionals had previously reported signing on for some of the office space.

Bucky Turco, the editor of the now-defunct Animal, recently got a look inside the under-renovation building ... and shared those images with Curbed.

A few observations from a look around the interior per Curbed:

• "Some of its historic elements, such as an original 19th-century elevator, are now preserved behind glass."

• "The basement is still in disarray, with the old bank vault still intact (though there's a crack in the glass)."

Check out the photos at Curbed.

The retail space is still on the market.

Previously on EV Grieve:
Take a last look inside the mysterious 190 Bowery
Posted by Grieve at 3:30 PM

I heard it was going to be a giant Chipotle, but then they had that little e. Coli problem, so no burritos for the Bowery.

This building is such a gem. As is the the one at Bond and Bowery.