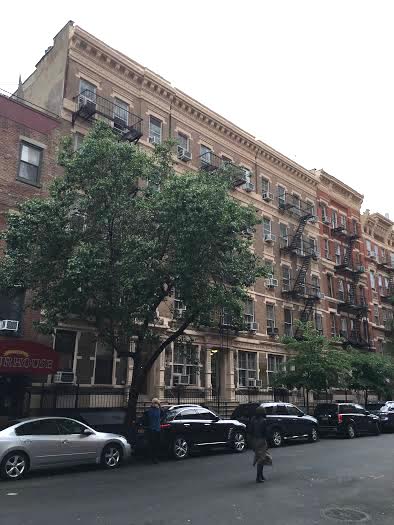 Back in late April, when news broke that the 6-building portfolio of 85 E. 10th St. and 112-120 E. 11th St. had been sold, an EVG commenter with some inside information left the following:

Lightstone will be demolishing the properties on 11th street beginning this year, and plans to develop a hotel there on behalf/with one of its hotel partners— most likely Marriott— to build one of their low-budget "hip" hotels, branded as "Moxy". They will be doing minor refurbishing to 85 East 10th Street, and then will look to unload it. They only bought the property because Pan Am required purchase of 85 E10th as part of the 112-120 E11th deal.

Yesterday, The Real Deal reported that the East 11th Street buildings between Third Avenue and Fourth Avenue will be demolished to make way for a ... 300-room hotel with Marriott International’s Moxy Hotels serving as the brand.

85 East 10th Street — which represented $75.4 million of the total purchase price — is not going to be part of the project. In fact, Lightstone wants to sell it, and hired a team from Meridian Capital Group to bring the 121-unit, 69,100-square-foot rental building to market.

There are other Moxy properties in the works at 105 W. 28th St. in Chelsea and 485 Seventh Ave. south of Times Square.

Reps for Lightstone haven't filed any new permits yet for the East 11th Street buildings.

Previously on EV Grieve:
6-building complex on East 10th Street and East 11th Street sells for $127 million
Posted by Grieve at 4:30 AM

When exactly was the public comment period for this zoning disaster...

Are there current tenants in those buildings that are getting kicked out? I can't imagine they are empty. And why would the city allow this when we desperately need housing for people? I know. Dumb question.

Oh for Chrissakes, so now we have to lose those three lovely old buildings so a bunch of budget-seeking morons can have The Moxy Experience in what is supposed to be a residential neighborhood first and foremost? A plague on Lightstone now, too; the list just keeps growing.

Okay that is a shitty block in regards to noise but the EV just lost housing which will now be the ultimate in transient living, a hotel. This might be the next trend, demolish rental properties on residential blocks versus Avenues. More taxis, Uber, noise, overcrowded streets and sidewalks. This city is fucked.

What role did de Blasio and his ilk have in this disaster in the making?

Wait, we already have an overpriced hotel chain in this neighborhood that caters to tourists and transients--it's called NYU.

How were so many apartments emptied?
Landlord must have held some apartments vacant for a while.
Unbelievable.

EV Grieve - Any chance you can persuade the NY Times to do an article on this as an example of the housing loss that is going on all over NYC?
And the scam that follows - developers get tax breaks to build new luxury housing with a few "affordable" units.

Agree with Anon@7:05am. Are zoning laws just a suggestion now?

Man are you kidding ?? This is right across from Webster Hall
I am sure noone really wants to live in that noise and rukus

This is actually a perfectly fine place for a hotel

There couldn't be "More taxis, Uber, noise, overcrowded streets and sidewalks." than there already is on that block because Webster Hall makes it a crazy shitshow 5 nights a week. It's also noisy as hell all day because delivery trucks double park blocking 11th street and then other trucks can't get past and lay on their horn for minutes at a time. Plus there are the people without jobs who spend their days watching european soccer and run into the street yelling when their team scores.

I'm so happy I a) installed internal storm windows in my apartment at 111 4th that overlooked that street, and b) sold my apartment last year and moved to the country.

Just thinking about the screaming drunks at 4am or truck drivers and soccer fans yelling at each other at 11am gives me anxiety all over again.

That's a great location for parents of NYU students to stay in, but nobody will ever stay there more than once unless Marriott get Webster Hall to clean up their act.

Also, since Webster Hall security and the Post Office have privatized the entire sidewalk on the north side of 11th and construction will block the south side, I guess pedestrians will have to walk in the street amongst the double parked cars, trucks, and taxis? Maybe Marriott's lawyers will have better luck than the neighbors in getting laws observed - the NYPD and 311 certainly have never given a shit.

The zoning for the 11th St addresses is C6-2A, which is mixed commercial use with height limits, described here:
http://www1.nyc.gov/site/planning/zoning/districts-tools/c6.page

I can only imagine what this will mean for pedestrian and road traffic on the street. Eventually this city will be one big outdoor shopping mall, like SoHo, with no regular taxpayers to support the municipality.

Webtser Hall wil soon be closing just like Wetlands,. Knitting Factory, CBGB and Tonic were all pushed out to meet the needs of the nobles.

Wow, 300 rooms. Did they buy the air rights from the Post office at the end of the block ?

Please report that to 311 or NYC.gov when that happens. Even if they don't get there in time to stop the offender, such complaints get logged. The more who do this the more likely the city will actually begin to enforce the "No honking" laws.

Otherwise the assumption by the powers that be is that people don't mind the honking. See here for example:
http://www.nytimes.com/2013/01/29/nyregion/new-york-removes-no-honking-signs.html

Quote: “Blowing the horn is a fact of life, part of the fabric and culture of the city,” said Robert Sinclair Jr., a spokesman for AAA New York. “If it weren’t there, people would wonder.”

It's not a "fact of life"; it's a choice, and it's noise pollution.

I, for one, am glad we still have Webster Hall, at least for its live music programming, which is often quite good and varied.
(The cheesy club nights are another matter).
We have lost so many live music venues in the neighborhood, after all, from CBGBs to The Bottom Line (not to mention the old Five Spot, long before my time!)

10:04 AM: If its mixed commercial and residential, how does it get to be a hotel? I wonder if the Mayor's people arranged a special permit.

I'm not going to pretend to be knowledgeable about the hotel room market, but are there really that many people clamoring to stay in the upper EV/Union Square area that are not already being served by the W on 17th and Park, that fugly Hyatt on 4th (that was the Key Club when I moved here and then Spa? or Plaid?), the Standard EV, and that dumb luxury one down on the Bowery? Plus a bunch of nearby hotels like the Jane in the West Village? Plus the billion other hotels on the island below 59th that are closer to whatever godforsaken transportation brings these people here?!

Anon@12:16p: On EV Grieve's facebook post of this same entry, someone posted a very plausible money trail that leads back to de Blah-sio.

I cannot wait for the real-estate and hotel bubble to burst. NYC, Killed by Kapitalism.

@11:10am: My understanding - and I may be wrong - is that NYU (or their developer) bought the post office's air rights in order to build their tallest-building-in-the-East-Village dormitory on 12th between 4th and 3rd Aves. The one they knocked down St. Ann's Church for.

So count me in with all those who don't understand how a hotel can get built on that block.

That block is a disaster as it is and a hotel will just make it more of one. But who cares, right? The decision makers don't live here, it's just another Monopoly transaction.

And yes, the post office's air rights are what fueled the dorm on 12th (and the end of St. Ann's, except for the confusing ruins...confounding passersby daily for years.)

Must they tear down, why not convert the buildings to a hotel with some bare modicum of charm?

People have lived there for decades. Many pre-date Webster Hall. Get your facts before posting.